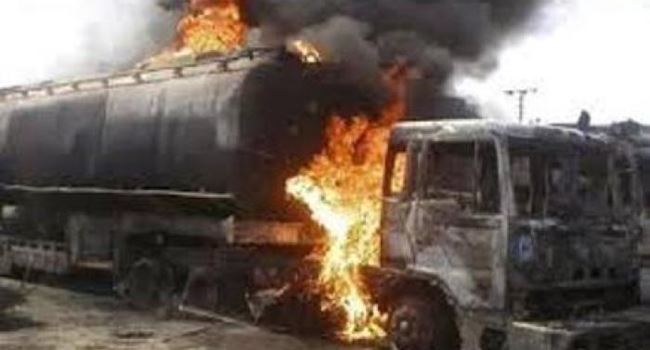 Several residents of Benue community on Monday lost their lives in an inferno that ensued in Ahume village on the Alliade/Makurdi Federal Highway.

It was gathered that the incident occurred when a tanker loaded with petroleum product fell while trying to avoid potholes at Ahumbe.

It was gathered that villagers in the area quickly ran out to the scene of the accident to scoop fuel from the tanker that fell and in the process, the vehicle exploded and killed 26 people.

A resident at the scene, Meme, said  “You know that tankers are always partitioned in drums. So, the people went to the scene of the accident to scoop fuel. In the process of scooping fuel, there was an explosion, which resulted in 26 people burnt to death.”

According to him, a commercial bus with passengers also ran into the accident scene.

Confirming the state Police Public Relations Officer, Catherine Anene, said, “The DPO in Aliade confirmed that a fuel tanker fell on the road and that the villagers ignored the warnings of the security men and in the process, there was an explosion; many people were injured and rushed to hospital in Aliade.”

On the number of lives lost in the accident, she said she was yet to ascertain that.