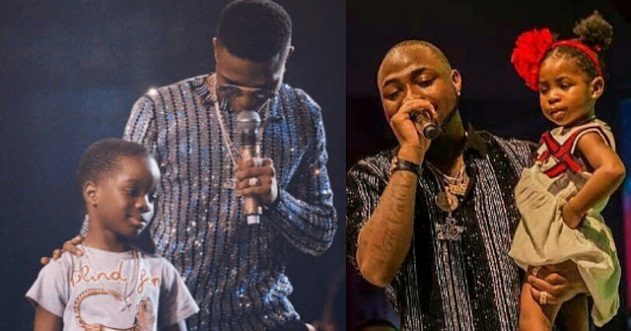 Starboy head honcho Ayodeji Balogun popularly known in music circles as Wizkid may have conquered the music scene with his hit songs and lovable persona, but the ‘Soco’ crooner may have come short in his role as a father.

Since the turn of the New Year, the sensational singer (who has three kids from three different women) has been involved in unpalatable exchanges with his baby mama’s who accuse him of not living up to his daddy duties.

Recall that as far back as the month of May this year, Sola Ogudu, who is the first woman to have had a child for the singer took to her Twitter account to slam Wizkid for not being a good father to their son.

According to her, she has been both father and mother to their seven-year-old son named Boluwatife.

Her tweet at the time read thus: “Being a mom and a dad and still manage to slay all at once on a legit income. Please, I need my accolades served chilled. It’s much deserved. ….. I feel the need to call someone out soon bad, like just blast our full real history for the public. Let the world know the real truth, not the lies this person has made the world believe.”

Reports say Boluwatife’s mum was even more enraged that Wizkid did nothing (at least on his social media handles) to help promote his son’s launch of a clothing line for kids on his 7th birthday.

Surprisingly, in the month of July of the same year, Boluwatife’s mum took to her Twitter page to commend Davido’s positivity and mentioned how happy he makes her, unlike Wizkid who according to her, is full of negative energy. She gushed over Davido and even called him a “sweet boy.” She wrote; “Might seem weird, but Davido’s positive vibes and energy makes me so super happy. I love him. We rise by lifting others. He’s a sweet boy.”

Wizkid has been in the news again in recent times as his second baby mama Binta Diallo is accusing the multiple award-winning artiste of abandoning his responsibility as a father to his two-year-old son, Junior.

According to the mother of one, she considered suing Wizkid to court for not living up to his responsibilities as a father, but she didn’t because some of his family members begged to settle it out of court.

An enraged Binta went ahead to release proof on social media to back her claims by revealing court papers which showed that the ‘Babanla’ crooner was supposed to pay monthly child support of N725k but has since defaulted.

Days after exposing Wizkid, Binta again attacked the father of her son on social media saying the singer is always liking pictures of their son which gets shared on an Instagram account not owned by the kid, but never follows the kid’s genuine account nor likes any of the pictures there.

Binta wrote on Instagram: “Stop posting my son here @thebalogunboys my child is not part of your Balogun family just stop with the fake love shit.

“N—a needs serious help for real, I can’t deal. This deadbeat can follow this page and show fake love to my son here but never bothered to follow my son’s account or be a father to him. Post the kids you love, claimed and your family. P.S I know who runs this account.”

Binta had also earlier called out the singer for not paying their son’s school fees after Wizkid tweeted that he planned to build public schools across Africa, an accusation which came after the singer’s other baby mama, Shola openly accused the musician of being a deadbeat dad who has refused to take care of his sons.

However, the singer seemed unperturbed by the negative vibes he’s getting from his first two baby mama’s as he seems all settled down with Jada Pollock, his third baby mama whom he praised on social media days ago in the same breath as he shamed his other two baby mama who he described as “h**s”.

He wrote; “Waking up next to him every morning brings me joy, thank you, Jada. Zion was right by my side to show me all the love and support I need. After #made in Lagos, next project. “Zion” ready to go. Ignore the money hungry h**s.”

Much said about Wizkid and his inability to live up to his daddy duties as we take a look at another fellow musician, Davido, who seems to be faring well as a father to his two beautiful daughters.

Below we take a look at three daddy lessons which Wizkid could learn from his fellow counterpart, Davido.

(1.) A doting father who spends quality time with his daughters

Distance seems not to be a barrier for Davido who dotes on his daughters and never ceases to show them off when he can. In the same month of May when Sola Ogudu accused Wizkid of not being a good father to their son, Davido flew all the way to Atlanta, USA, to throw a lavish party for his second daughter Hailey Veronica Adeleke, who turned one-year-old at the time.

Months before Hailey’s birthday, Davido shared a really adorable photo of her via the gram and gushed over the similarity in their looks. He wrote: “Hailey baby! See my face.”

Also, when Hailey was given birth to on May 9th, 2017 with his Atlanta based baby mama, Amanda Mandy, an elated Davido who couldn’t hide his joy took to social media to welcome his second daughter.

The singer has also shown equal love to his first daughter Imade Aurora Adeleke as days after celebrating his second daughter’s birthday in Atlanta, the singer was back home in Nigeria to throw a lavish party for his child who turned three.

(2.) Named his daughters after his late mum

The energetic singer is said to be the only child of his late mum, Dr. Veronica Imade Adeleke, a university lecturer at Babcock University, Ilisan, Ogun state, who died in 2003, at the age of 39.

And in a bid to keep her in his memory, the singer who was just 9-years-old when she passed on, is transferring his love for his mum to his daughters by naming them after her as he once said he is seeing her in them.

That explains why he named his first daughter Imade after his mum and in the same vein, the singer also announced after Hailey was born last year, that her other name is Veronica.

In January 2016, the baby mama drama, and the child trafficking allegations leveled against Davido and his family by the mother of his first daughter, Sophie Momodu threatened to destabilise the musician.

But the pair decided to sheath swords for the sake of their child following a meeting at the time held at the request of the National Agency For the Prohibition of Trafficking in Persons (NAPTIP) attended by Sophie, Davido’s father, Deji Adeleke, Mr. and Mrs. Dele Momodu, Adeleke’s lawyer, counsel to Dele Momodu, Gbolaga Ajayi, Mr. Ajayi Famakinwa, and NAPTIP’s representatives.

Ever since there has been little or no complaints from Sophie or Amanda as the pair were both present with their daughters who met for the first time at Davido’s elder sister, Sharon Adeleke’s, baby shower staged last month.