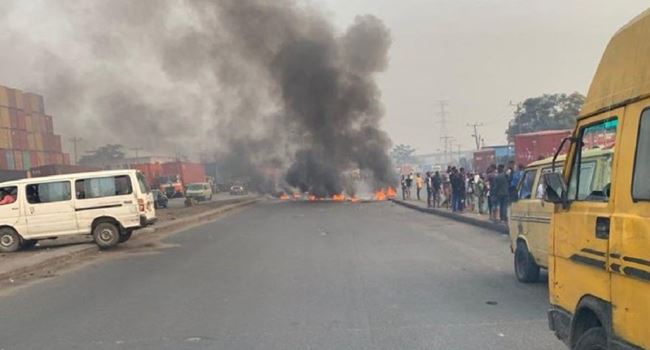 Three victims have been reportedly killed after they were hit by bullets as Policemen and motorcycle and tricycle operators were involved in a heated exchange in the Ijora area of Lagos.

Eyewitnesses say the victims who died during the clash between the police, motorcycle and tricycle operators included a student; one woman in an Ilorin bound vehicle and a tricycle operator.

Many also sustained various degrees of injuries when commercial motorcycle operators and those belonging to tricycles association took to the streets on Monday morning to protest the ban on their activities in parts of Lagos state.

The death of the three victims was however denied by the police public relations officer DSP Bala Elkana, who however confirmed that policemen actually dispersed the protesters in the area who according to him set burn fire and attacked innocent citizens.

The State Government had last Tuesday outlawed the operations of commercial motorcycles riders also known as Okada as well as tricycle operators also known as Keke Marwa in six local government areas of the state.

The enforcement of the ban started on Saturday, February 1, 2020. The police said about 40 violators were arrested while about 188 motorcycles and 78 keke Marwa were impounded.

I am a proof that coronavirus can be beaten, British victim says