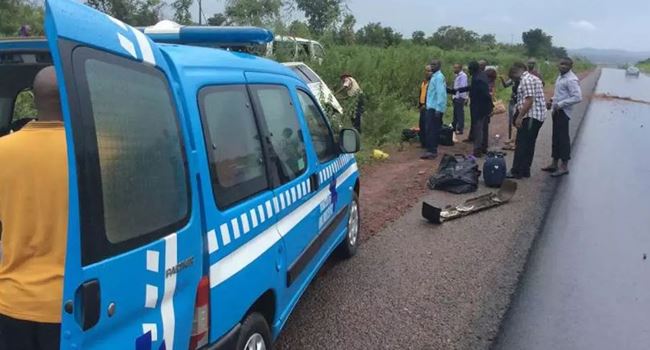 Mr Joel Dagwa, the FRSC Sector Commander in the state in an interview with the News Agency of Nigeria (NAN) on Friday said that the three victims died on the spot after the accident on Thursday.

According to Dagwa, the accident involved three people; two males and one female who died after a fatal collision between a Daf Trailer with registration number SHR 317 XA and an unregistered commercial bus.

Dagwa who blamed the accident on dangerous overtaking said that the sum of N74,680 was recovered from the victims.

He also informed that the corpses of the victims had been deposited at the Mokwa General Hospital morgue, while the money recovered was handed over to the relations of the victims by the FRSC Unit Commander, Mokwa.

“We have since embarked on aggressive patrols across all major highways to ensure that road users adhere strictly to traffic rules and regulations to avoid road accidents during and after the Christmas and New Year festivities,” Dogwa said.