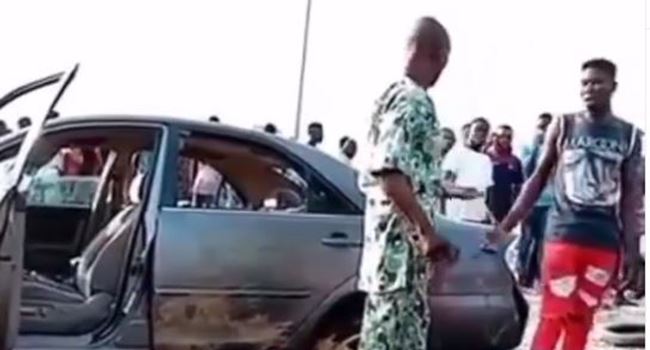 Four people have been reportedly hit and killed by a driver who took the wrong lane in the Ajah area of Lagos State.

Three of the four people killed were said to be siblings.

The ghastly accident occurred in the Sangotedo area of Ajah, Lagos on Tuesday morning.

According to reports, and videos put online by witnesses, the three siblings were said to have visited their mother in the area and were returning when the accident, which was reportedly caused by another driver who took one way, occurred.

The video of the accident showed the car badly damaged and standing across a drainage, with some of the doors hanging open.

Sympathizers can be heard in the video shouting that the driver who caused the accident took ‘one way’.

Though there was total lockdown in the state over the COVID-19 pandemic, motorists in the Lekki/Ajah areas have been reported to have constantly defied the order of the Federal Government, with heavy traffic witnessed some of the areas.