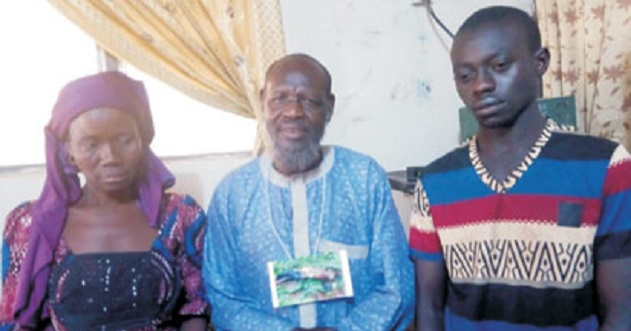 An herbalist identified as Abdullahi Abubakar, and two siblings Umaimatu Tanimu and her brother, Adamu Mohammed have been paraded by the Gombe State Police Command for allegedly killing a 6-year-old for money ritual.

Reports say the quest by both siblings to become rich overnight made them to seek help from the herbalist who told them they’d need human kidney to perform a ritual to make them millionaires.

The older sibling Umaimatu, 36, did all she could to convince her brother that she’ll provide a victim for the sacrifice and she did when she lured six-year-old Maimuna from Sabongida-Takai village in Gassol local government area of the state into a bush on the outskirts of the community.

Umaimatu (mother of three) later called her brother who joined her in ripping out the kidneys of the victim and later abandoned the corpse in the bush.

According to reports, the dastardly act committed by the pair became public notice as they fled the village but they were both arrested by detectives from Taraba State Police Command.

According to one of the suspects, Aminu, he was convinced into the act by his sister who agreed to provide the sacrificial lamb after he initially kicked against the idea.

He said; “The man told my sister and l to make available human kidneys for money ritual. At first I disagreed but when my sister gave in to the demand, I also agreed.

“My sister was the one who provided the small girl we killed and extracted the kidneys from. She lured the small girl into the bush before calling me to meet her up so we could hasten the process.

“She showed me where kidneys are located in the human body before I killed the girl and later removed her kidneys.”

While speaking during the parade of the suspects who confessed to the crime, spokesman for the police in the state, ASP David Misal, revealed that Adamu confessed that he ripped open the girls stomach to bring out the girls kidney while his elders sister held the infant.

ASP Misal who was speaking at the headquarters of the command in Jalingo also disclosed that the incident happened on Sunday, September, 2 around 8pm.

Th police spokesman also informed that the suspects who are being investigated for criminal conspiracy and culpable homicide will soon be charged to court.