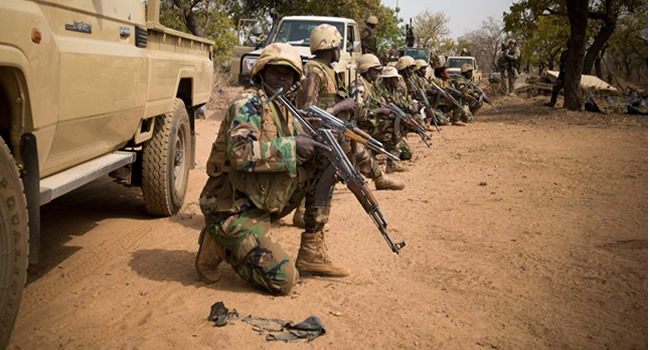 30 people, including women and children, have been killed in Kodyel village in Komandjari province of Burkina Faso, after about 100 rebels invaded the community on motorcycles and trucks.

The incident which happened in the night of Monday, according to a government official, Labidi Ouoba, saw the rebels attacking the village located in the eastern part of Burkina Faso near the border with Niger Republic burned down homes and shot the villagers as they tried to escape.

A resident who managed to escape the carnage, Mediempo Tandamba, said:

“I ran early because the terrorists usually look for authorities. We all pray that peace comes back now in our country. We are tired. We are very afraid here today,” he said.

Tandamba said about 100 fighters entered the town on motorcycles and pick-up trucks, adding that four of his brother’s children were killed in the massacre.

The attack comes exactly one week after two Spanish journalists and an Irish conservationist were killed and a Burkinabe soldier went missing when an anti-poaching patrol was ambushed by rebels in the same region.

That same day, 18 people were killed in Yattakou village in the country’s Sahel region.

Burkina Faso’s ill-equipped army has struggled to contain the spread of violence linked to al-Qaeda and ISIL (ISIS) who have killed thousands and displaced more than one million people.