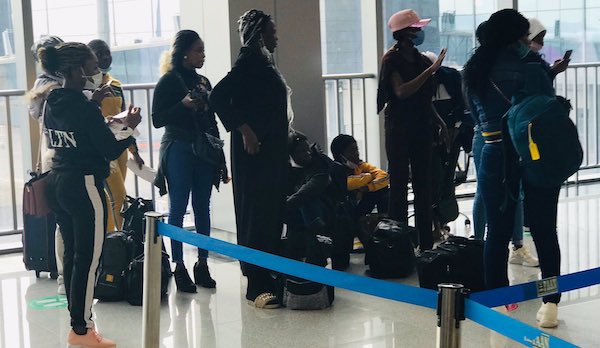 According to him, the welfare of Nigerians remains the government’s top priority.

Akinremi made this known on Wednesday in Abuja when the Federal Government received another batch of 418 stranded Nigerians from Saudi Arabia at the FCT Hajj Camp, a temporary shelter for returnees.

Akinremi said the 418 returnees were among the three batches of stranded Nigerians that were evacuated from Saudi Arabia in one week.

He said that aside from the evacuation, the Federal Government would be giving each of the returnees above 10 years of age #20,000 each for transportation back to their states and to aid their resettlement.

“This set of returnees from Saudi Arabia came in three batches. 255 came in on Monday, 398 came in on Tuesday and today the third batch of 418 has just arrived,

“They will be staying in this facility, the FCT Hajj camp which has been provided by the Federal Capital Territory Administration (FCTA) for three days.

“In line with the COVID-19 protocols, the first day will be for arrival, the second day for COVID-19 testing and profiling while the third day would be to get their results and depart to their various states.

“The Federal Government beyond evacuation has made provision for a new life for them. N20,000 will be given to adults and anyone above 10 years. This will help them with transportation and start a little business.

“Within two months we have received 3,000 stranded Nigerians abroad and the Federal Government is doing everything possible to ensure no Nigerian outside the shores of the country is in crises”, Akinremi said.

Akinremi also explained that the evacuation process was not just focused on Saudi Arabia but across all countries where Nigerians were stranded.

He said that last week, the International Organisation for Migration (IOM) also facilitated the return of 120 stranded Nigerians from Libya.

Mrs Imaan Suleiman-Ibrahim, Director-General, National Agency for the Prohibition of Trafficking in Persons (NAPTIP), in her remarks, said the Nigerian government was keen on rescuing all trafficked and stranded citizens abroad.