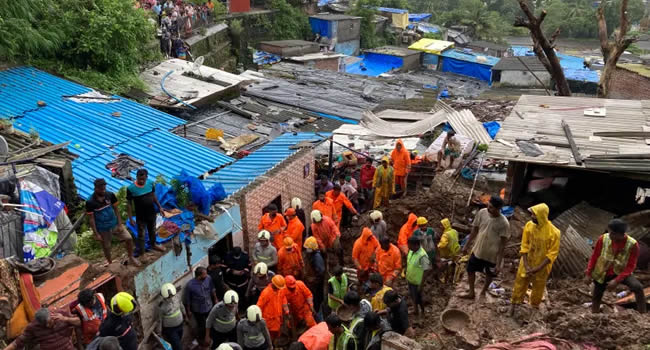 At least 31 people have been killed as torrential rainfall swept through Mumbai, India’s financial capital on Sunday night, triggering landslides that crushed cars and houses while leaving neighborhoods devastated.

According to Satya Pradhan, India’s National Disaster Response Force Director General, 21 people died in the Chembur suburb, in India’s western state of Maharashtra, while 10 people were killed in the suburb of Vikhroli.

He added that rescue efforts continued through the night, with workers digging through mud and debris to find survivors.

Mumbai’s water supply was also affected after a purification complex was flooded, as thunderstorms and extremely heavy rainfall continued in isolated places.

Indian Prime Minister Narendra Modi expressed his sadness at the incident and offered his condolences to the families of those killed.

“Saddened by the loss of lives due to wall collapses in Chembur and Vikhroli in Mumbai.

“In this hour of grief, my thoughts are with the bereaved families,” Modi wrote on Twitter on Monday.

Related Topics:deathIndiaInjurieslandslideMumbairainfalltorrential rainfall
Up Next