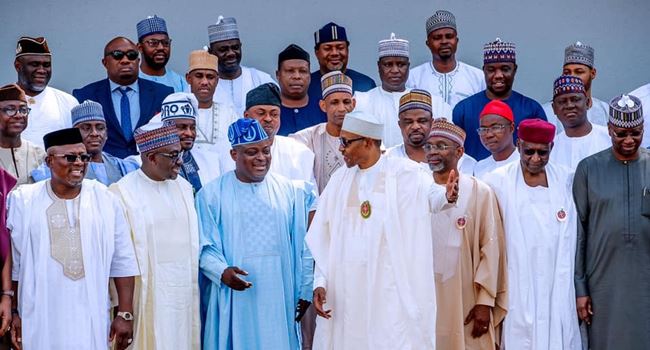 The Conference of Speakers of State Legislatures of Nigeria met with President Muhammadu Buhari on Thursday, armed with some demands.
According to chairman of the group, Mudashiru Obasa, the demands, are part of ‘issues of national importance’.

Obasa, speaker of the Lagos State House of Assembly, who spoke on behalf of his colleagues, first noted Buhari’s role in the passage of and assent to the fourth alteration to the 1999 constitution (as amended) which, among others, grants financial autonomy to both state legislatures and the judiciary.

Here are four demands from the speakers as reeled out by Obasa:

1. An executive order on financial autonomy to state legislatures, judiciary

He said many Houses of Assembly in Nigeria and state judiciary have continued to suffer the challenge of relying on the executive arm for funding, even when they are acclaimed independent arms of government.

This, he argued may have hampered their successes in most cases.

Obasa therefore, urged the Buhari administration to rely on the constitutionally guaranteed power for an executive order for effective implementation of the act which the president recently signed granting financial autonomy to the state legislatures and judiciary.

2. Devolution of powers from the federal government to states

The speakers, through Obasa, said the federal government needs to shed some of its weight by devolving power to the states by reducing some items in the ‘exclusive list’ to the concurrent list.

According to them, items like railway, police and such may be expanded to states.
“Similarly, while we appreciate many landmark policies introduced by this administration in the health sector, we want to appeal to Your Excellency to charge the relevant ministries and agencies with a view to ensuring better access to essential health facilities and medicare by the masses at the grassroots,” the speakers said.

The speakers want President Muhammadu Buhari to create a time from his busy schedule to relate with them, understand their challenges and progress and share ideas with them.

4. Inclusion of speakers in presidential entourage

Just like governors and ministers make the entourage of Buhari, especially on foreign official trips, the speakers want an opportunity to travel with the president.

They believe this would assist in broadening their knowledge about governance, its issues and targeted solutions.