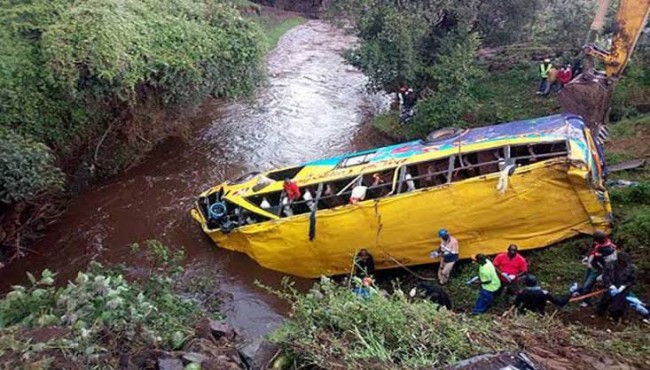 At least 41 people including members of a Catholic Church choir were feared dead on Saturday after the bus they were travelling in plunged into the Enziu River in Kitui County, South-East Kenya.

The deceased were coming back from a wedding ceremony when the accident occurred.

The Kitui County Police Commander, Leah Kithei, who confirmed the incident in a statement, said the 51-seater bus belonging to Mwingi Junior Seminary, a Catholic Church-run private school, was ferrying the choir members to Nuu area from Mwingi town.

She said: “So far, 20 bodies had been retrieved from the bus while 10 people had been rescued and rushed to Mwingi Level Four Hospital for emergency treatment.”

Kithei said police operatives had been deployed at the scene to coordinate the rescue efforts which were hampered by the raging waters.

The police officer added: “We are hoping to rescue as many people as we can.

“Among the passengers in the ill-fated bus were members of the bridal party, including a woman, her three children, and two grandchildren.

“The choir members went to perform at the wedding to solemnise the marriage union of the parents of one of the members.

“This is a river and it was flooding. The driver lost control and slid into a ditch. The bus capsized next to the bridge. The driver had also died. The bus was leaving Mwingi Central towards Nuu in Mwingi East.”

Video footage of the tragic incident showed the bus being swept away after the driver tried to cross the fast-flowing water over a bridge in the Enziu River, about 200km (125 miles) east of the Kenyan capital, Nairobi.