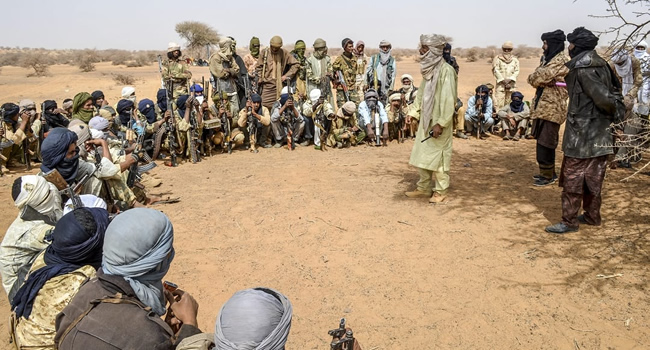 At least 49 people, including five civilians, four soldiers and 40 armed Jihadists were killed on Sunday in a clash in the restive South-West region of Niger Republic when the attackers reportedly invaded the area which is close to the country’s border with Mali.

A Ministry of Defense official who confirmed the incident in a statement, said around 100 heavily armed “terrorists riding on motorcycles attacked the Tchoma Bangou village, striking around 3pm on Sunday, but were repelled by the army stationed there.

“The prompt and vigorous reaction by the Defense and Security Forces made it possible to repel the attack and inflict heavy losses on the enemy,” the statement said, adding that soldiers had seized motorcycles and a cache of weapons, including AK47s and machine guns, from the assailants.

Tchoma Bangou is located in the troubled Tillaberi region, bordering Mali and Burkina Faso, an area known as “the three borders” that has been regularly targeted by jihadist groups.

Tillaberi has been under a state of emergency since 2017 while the country’s authorities have banned motorbike traffic night and day for a year and ordered the closure of certain markets suspected of supplying “terrorists” supplies.