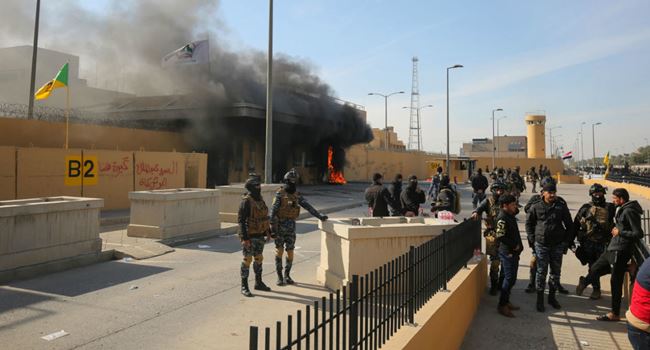 The heavily fortified United States embassy Green Zone based in Baghdad, Iraq came under attack late on Sunday evening when it was hit with five rockets as anti-government protests continued.

US Joint Operations Command said in a statement that the five rockets crashed into a riverbank near the embassy in the Iraqi capital without causing any injuries to anyone.

However, local officials citing a security source said three of the rockets “directly hit the US embassy”. One slammed into a cafeteria at dinner time, the officials added.

The attack was swiftly condemned by the Prime Minister of Iraq Adel Abdul Mahdi in a statement, calling it an “aggression” that could “drag Iraq into becoming a war zone”.

In its reaction to the attack, the United States in a statement urged Iraq to protect the embassy.

“We call on the Government of Iraq to fulfill its obligations to protect our diplomatic facilities,” a State Department spokesperson said in a statement.

The attack was the third such attack on the US embassy this month but was the first time the complex had been directly hit. It was not immediately clear who was responsible.