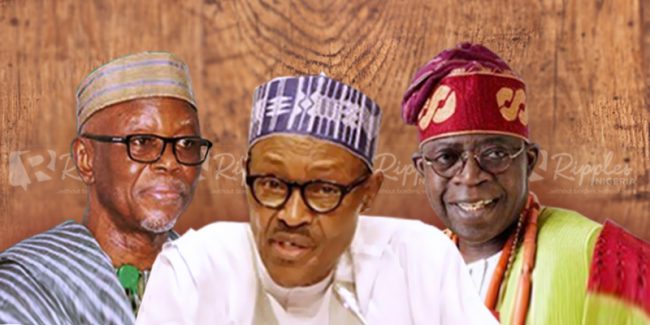 1. What goes round comes around

Whatever goes around comes around is a popular cliché which is now proven by the state congresses of the All Progressives congress (APC), which held across the country on Saturday, May 19, 2018. And to announce that the party is no different from the Peoples Democratic Party (PDP), which it displaced at the federal leadership table in 2015, one of its most vocal members, Senator Dino Melaye, still suffering humiliation for talking too much, took to his twitter page to say: “Congratulations to the 72 new state chairmen of APC. Every where na double double. What a blessed party”.

2. APC is made up of humans after all

Every ex-PDP member who resigned from the party to join APC always gave one reason –that the party had become acrimonious and that internal democracy was lacking. Many also complained against imposition of candidates in PDP and hoped that APC would be different. But with last Saturday’s congresses, APC proves that change is still a way far off and that humans of the Nigerian specie, not angels from outer space, populate the party, like other political parties in the country.

3. Acrimony not exclusive preserve of PDP

The party also proved that acrimonious congresses and rancorous party organizations is not an exclusive of PDP but something about the power game where the have-nots battle to position themselves to upstage the haves who in turn battle to retain position and sustain their well-being.

In Lagos, APC’s flagship, the closely guarded secret about spilt in the state chapter of the party, could no longer be held back as the Muiz Banire/Babatunde Fashola faction came up to openly state a claim to the party and challenge Bola Tinubu’s continued hold of the structures of the party.

Banire and Fashola are not known to have hidden their aversion to the domination of Lagos politics by Tinubu, who brushed Fashola aside to impose Akinwunmi Ambode on the state as governor. The Fashola camp has preferred Deji Sasegbon, a Senior Advocate of Nigeria and Attorney General under Fashola’s government, as replacement. But the Tinubu machinery out-paced Fashola in the race to buy-over delegates and this installed Ambode, who Fashola had forced to quit as a financial administrator of the government over some allegedly scrupulous dealings.

Read Also: How Okorocha lost his groove in APC

Fashola and Banire are also said to form the nucleus of a new southwest group within the Federal government, working to cut Tinubu to size in the region and end his domination of the political life of the zone. The parallel congress which produced Faud Oki as factional chairman for Lagos APC, may just the beginning of an open fight for the soul of Lagos APC after attempts by the Tinubu’s faction to have Banire removed as National Legal Adviser of the party failed, though a vote of no confidence at his Mushin ward, succeeded.

In Imo state, Hillary Eke was returned as state chairman of the party despite a last minute effort by governor Rochas Okorocha, working through allies, to stop the Congress vide an interim court order and an Imo state police command warning against disrespecting the court order which asked parties to maintain status quo ante bellum.

Abia state APC also held parallel congresses producing two state chairmen. The two congresses were secured by the Police. While the Donatus Nwamkpa faction held its congress at the Township stadium Umuahia, the Ikechi Emenike faction held its own at a private property on Ossah road in Umuahia too. None held at the party’s secretariat like in Lagos where the Tinubu group held it’s at the party secretariat while the Banire faction sat at the Airport Hotel, all in Ikeja.

Interestingly, the two congresses had representatives from National headquarters of the party. Sen. Jonathan Zwingina, who, as PDP senator, was accused by Nasir El-Rufai of demanding bribe, on behalf of the Senate, to clear him to become Minister in the Olusegun Obasanjo cabinet, led the four member state congress committee to monitor the Nwamkpa congress at the Township Stadium Umuahia while Hajia Rabiu Sulu-Gambari and Alhahi Garba Sani supervised the Emenike congress which produced Dr. Emmanuel Ndukwe as chairman. Both committees disclosed that they were sent by the National headquarters of the party and as such the congresses were authentic.

4. The centre may not hold

What this portends is the reality that the centre may not be holding firm in APC anymore. Reviewing the situation, Segun Sownunmi tweeting @SowunmiSegun said, “APC is collapsing on itself. This s what you get when you are saddled with leaders who do not respect the principle of free, fair, inclusive, transparent party management. You cannot lord it over the people forever. APC is hemorrhaging all over the country. Sad, so sad”.

Ehi Michael, tweeting as @UniqueMykel said, “APC is an anarchist movement filled with hatred and bitterness. They have failed to transit from an opposition to a ruling party and now, they are opposing themselves”.

But the party said on its twitter handle that “@officialAPCNg position is that there is no such thing as parallel congress. The only congress recognized by the party is that conducted in accordance with the party constitution, which was organized by the congress committee charged by the party”.

It also stated that “we regard so-called parallel congresses as exercise in futility and attempt to cause confusion in the party. Party members with genuine grievances regarding the congresses should channel such through the Appeals committee in their respective states”. However, it was quiet on the situation in Abia state where two congress committees where allegedly sent in by the APC headquarters.

5. A troubled national convention in the offing

APC’s troubled congresses will lead further to a rancorous national convention as the Tinubu Peace committee has evidently failed to mend fences within the party.

The Committee was created by President Muhammadu Buhari to reconcile members. But from the congresses, from the ward to the state levels, it is evident that Tinubu did not achieve much. Rather time and resources appear to have been wasted pretending to be reconciling members while in essence, the push was to get Chief John Odigie-Oyegun out of office.

The soul of APC will be on the stakes when the National Congress holds in June. Outcome of the convention will make or break the party, proving like in the PDP era, that seamless congresses are not yet possible in an environment where public office is a very thriving economic activity.

OSUN 2018: I’m leaving PDP for SDP after ‘consultation with my God..’- Omisore