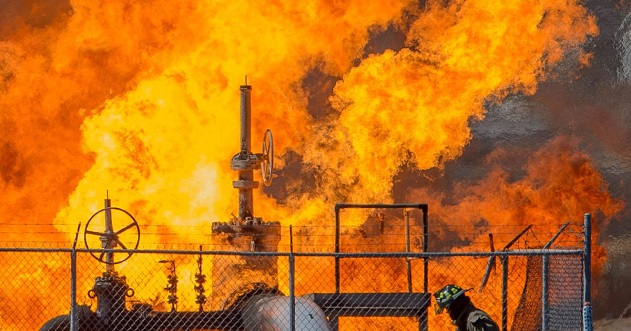 It was wailing and gnashing of teeth on Friday in the commercial city of Aba, Abia State, as 50 persons were roasted to death in a pipeline explosion.

The exploded pipeline belonging to the Pipelines and Product Marketing Company (PPMC) also sent another 30 persons to the hospital.

Eyewitnesses said the fire was ignited by a motorcycle driven by some soldiers who stormed the area.

Reports say families wept over the death of their members who were burnt beyond recognition while scooping fuel along the pipeline. The victims included a nursing mother who left her two months old baby at home to scoop fuel.

Reacting to the news of the explosion, the Nigerian National Petroleum Corporation (NNPC) said in Abuja that the incident might have been caused by suspected oil thieves who had hacked the line to intercept the flow of petrol from Port Harcourt to Aba.

NNPC Group General Manager, Group Public Affairs Division, Mr Ndu Ughamadu, who confirmed fatalities and loss of properties in the inferno, said the corporation’s safety experts, along with men of the Abia State Fire Service, immediately swung into action to contain the situation.

The GMD, who prayed that God reposed the souls of the innocent ones that perished in the incident, warned members of the public against tempering with oil and gas facilities many of which he said were inflammable.

Dr Baru also called on host communities to create avenues to moderate criminal tendencies of a few bad eggs living among them.

The explosion occurred at 1.30 am near abandoned pipeline at Umuimo and Umuaduru villages in Osisioma Ngwa council area.

According to reports, the pipeline was said to have been abandoned for about three years, but was suddenly used to pump fuel leading to heavy leakage of the product in the area, making residents of the area to take the opportunity of the leakage to scoop fuel which they sold to the public.

Soldiers prevented reporters from taking pictures of the burnt bodies as they blocked the area.

Reports indicate that information about the leakage spread more than three years ago, but was not attended to.

A resident in the area said: “The issue of the abandoned pipeline started over three years ago. We received information that there was leakage on the line. We called the authorities and they said it was from the old line which government was no longer using because there were two other lines there.

“Unfortunately yesterday, instead of pumping through the line they used to maintain, they now pumped through the abandoned line. Everywhere there was leakage of fuel. Fuel was pumping without direction and only God knows where they were pumping it to. Fuel covered the entire bush and when the fire started, my whole house was burnt.

“Everything was gone. When the leakage started, we called the Civil Defence and they came to help us scare people away from scooping, but unfortunately, they succeeded in entering and around 4:30 am yesterday. I didn’t come out with anything. I now have only my uniform and my torchlight. Two of my tenants were burnt and most people came to rush them to the hospital. I don’t know if they are alive.”