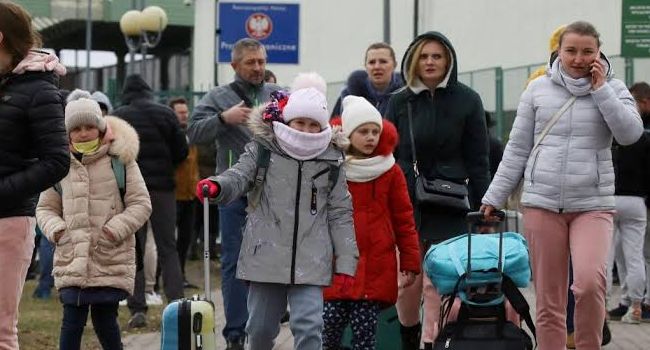 The United Nations Children’s Fund (UNICEF) has raised the alarm at the rate Ukrainian children are forced to flee their war-torn country, with a whopping 55 of them becoming refugees every minute.

In a statement on its website on Tuesday, the UN Children agency said the “grim figures are a reflection of the growing humanitarian toll from the conflict that’s approaching its third week, since Russia invaded Ukraine on February 24,” adding that so far, about 75,000 children have been fleeing the country each day.

The United Nations humanitarian agency also said in a statement says that since Russia invaded Ukraine, more than 1.5 million children have been forced to flee their homes, some separated from their parents and families.

“This refugee crisis is in terms of speed and scale, unprecedented since the Second World War, and is showing no signs of slowing down,” UNICEF spokesperson, James Elder, said in the statement.

“Like all children driven from their homes by war and conflict, Ukrainian children arriving in neighbouring countries are at significant risk of family separation, violence, sexual exploitation, and trafficking,” Elder said.

The UNICEF spokesman added that he had just spent two weeks in the western Ukraine city of Lviv where pediatricians had received 60 children overnight from the besieged capital of Kyiv.

He said pediatricians told him that they would use stickers to prioritize treatment with a “green signifying a child could be left alone for now, yellow for those needing more immediate medical assistance, red for critical and black for those who couldn’t be saved.”

The agency said it is setting up more “Blue Dot” safe spaces, and over the weekend, a UNICEF convoy of 22 trucks with 168 tons of supplies arrived in Ukraine.

The supplies included midwifery, surgical and obstetric kits, oxygen concentrators, cold boxes, as well as blankets and winter clothes, water and other items.

But Elder added that “so long as this war continues, the situation for Ukraine’s children will only get worse.”