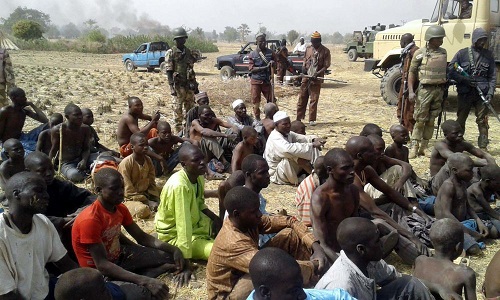 Fifty-eight people have been killed by insurgents suspected to be Boko Haram fighters after they struck three market communities in Niger Republic near the Malian border.

The attacks which began on Monday afternoon, continued unabated till the early hours of Thursday, when the insurgents invaded the Banibangou, Chinedogar and Darey-Daye villages.

A government official who confirmed the incident, said the terrorists had, on Monday, intercepted four vehicles carrying passengers back from the weekly market and opened fire on the victims, killing all of them in the process.

“The toll from these barbarous acts is 58 dead, one injured, a number of grain silos and two vehicles burned and two more vehicles seized,” the government official said in a statement on state television.

The official added that the following day, the insurgents moved to another community in the Tillaberi region located in the tri-border area, a flashpoint zone where the frontiers of Niger, Burkina Faso and Mali converge and also ransacked the village, killing several people and looted their food items.

A local resident in Tillaberi said the raids began with an attack on a bus travelling to Chinedogar, where about 30 people were killed.

Another resident said those killed had been shopping at Banibangou, a major market town just a few kilometres from the Malian border.

“The armed bandits attacked the villages at around 6pm, killing about 30 people.

“They stormed the village and intercepted a bus conveying passengers who had been shopping at Banibangou and opened fire on them,” the resident said.

“What we have witnessed in the past four days is so sad. We have lost many of our citizens to the terrorists.

Related Topics:CommunitiesinsurgentsNiger Republic
Up Next