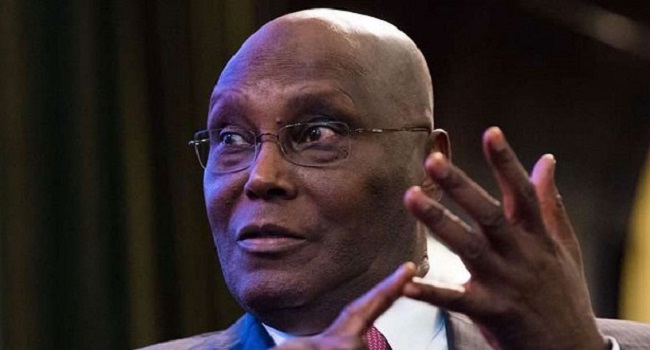 The presidential candidate of the Peoples Democratic Party, PDP, Atiku Abubakar, has said the 2019 budget estimates proposal presented by President Muhammadu Buhari to a joint session of the National Assembly last week Wednesday, was fundamentally flawed.

Questioning the budget and its foundations, Atiku said: “The 2019 budget is built on very shaky foundation and makes very generous, often wild and untenable assumptions which pose significant risks to its implementation.”

Below is the full statement:

President Muhammadu Buhari presented the 2019 Budget Proposals to the Joint Session of the National Assembly on Wednesday 20 December 2018. Its key aim is to, according to the President, ‘further place the economy on the path of inclusive, diversified and sustainable growth in order to continue to lift significant numbers of our citizens out of poverty’. The 2019 Appropriation Bill proposes an aggregate expenditure of N8.83 trillion for the year of which N4.04 trillion is recurrent, N2.31 trillion capital and N2.14 trillion will be devoted to debt service. The planned spending is lower than the 2018 budget by N300 billion. Allowing for 11% inflation rate, its real value is N7.95 trillion.

The proposed budget as presented is fundamentally flawed. It deliberately ignores and fails to address current realities and pretends, as Mr. President asserts, ‘we are on the right direction’. On the contrary, the 2019 budget is built on very shaky foundation and makes very generous, often wild and untenable assumptions which pose significant risks to its implementation. It will be a disservice to the country if we ignore these fundamental flaws.

Several inaccurate claims litter the budget document – all, I think, in an attempt for Mr. President to whitewash the regime and hide their monumental failure to improve, even minimally, the welfare and living standards of much of the population. I see the rhetoric of ‘inclusive, diversified and sustainable growth’ as no more than an amplification of the APC-led government’s renewed propaganda to hoodwink the citizens into believing that there is ‘light at the end of the tunnel’.

Few of these claims by Mr. President are that ‘we have recorded several successes in economic management’, that ‘the economy has recovered from recession’, that ‘foreign capital inflows including direct and portfolio investments (have) responded to improved economic management and that ‘we have had a sustained accretion to foreign exchange reserves’ etc.

In its current form, the local economy is not dynamic enough to journey to their so-called NEXTLEVEL. For the year 2019, a general slowdown in the real growth rates of economic activity in both the oil and non-oil sectors has been projected at 1.9% by the World Bank. This rate is well below the 2019 budget projection of 3.01% and is not enough to create the needed jobs for the growing population of the country or for the attainment of the SDGs.

As a sign of the weakness of the economy, the rate of unemployment has increased from 18.8% in 2017 to 23.1% in Q3 of 2018. Today, close to 20 million people are unemployed compared to 7.2 million people in 2014. These high rates of unemployment represent both a significant distortion in the economic system and a lost opportunity for critical national development and could potentially threaten social stability.

So, contrary to Mr. President’s assertion, capital importation actually shrinks! In reality Mr. President should expect no less. It is a fact that under his watch and resulting from his actions or inactions, investor confidence in the economy has waned like never before in Nigeria’s history. Nigeria remains an uncompetitive economy as demonstrated by the recent World Economic Forum (WEF), Global Competitiveness Index which positions Nigeria as 115th of 140 Countries. The Report shows that Nigeria has moved three places down, contrary to Mr. President’s claim that ‘we are moving in the right direction’. Nigeria remains one of the most difficult places to do business as evidenced by the massive outflows of capital in recent times.

Yes, we have seen some increases in gross reserves. However, the so-called ‘successes’ recorded did not emanate from any coherent and comprehensive economic policies of the Federal Government. The ‘sustained accretion’ to foreign exchange reserves resulted from increases in international prices of Brent Crude and foreign borrowing. Given our total dependence on the oil sector for foreign exchange earnings, any turbulence in the international oil market will lead to reversals.

This cannot be counted as ‘success’. The acclaimed ‘success’ was simply by the Grace of God.

This brings us to what the key question is: can the 2019 budget place the economy on the path of inclusive, diversified and sustainable growth in order to continue to lift significant numbers of our citizens out of poverty as PMB claims?

Here are 6 reasons why it cannot.

First, the 2019 is built on a very shaky foundation. It seeks to consolidate on the ‘achievements’ and ‘successes’ of the 2018 budget. However, the 2018 budget was itself poorly implemented. Actual revenue collected was only N2.84 trillion (as at September 2018) against projected revenue of N7.17 trillion. This implied that as at September 2018, only approximately 40% of projected revenues were realized by the Federal Government. Similarly, by December 14 2018, only N820.57 billion was released for capital spending out of a projected expenditure of N2.652 trillion. This implied that only 31% of the capital budget was implemented. This would impact negatively on growth, jobs and poverty.

With such a dismal budget performance, the economy would NOT have had the capacity to grow, generate wealth and jobs.

Secondly, the 2019 budget is a business as usual budget. The Federal Government keeps repeating the same mistakes BUT expects different results. For example, although the current resource position remains precarious, government does not intend to introduce significant fiscal restructuring. Thus, in spite of dwindling revenues, subsidy on PMS will continue (US$1 billion is budgeted for that); Government does not intend to introduce any reforms in the foreign exchange market as multiple exchange rates will be maintained – thus given away between ₦300 billion and ₦800 billion to opportunists, rent-seekers, middlemen, arbitrageurs, and fraudsters; and finally, the budget is overwhelmingly recurrent, with capital spending taking the back seat.

Thirdly, 2019 Budget is based on grossly exaggerated assumptions. They are NOT able to put in place any coherent and comprehensive policies to give hope that these assumptions can be met. For example the Oil price benchmark has been pegged at $60 per barrel and domestic oil production will be maintained at 2.3 million barrels per day. Of recent, the oil market has been turbulent and Brent Crude sells at less than US$60. There are projections of over-supply resulting from US shale production and pressure on Saudi by the US not to cut production. With regards to local production, we all know that throughout 2018, average production was 1.95 million barrels per day. Indeed, the latest report from OPEC suggests that Nigeria will be required to cut production to 1.65 million barrels per day. This implies that revenue targets to implement the budget will not be met.

The most laughable assumption is that real GDP will grow at 3.01 percent. When indeed, GDP growth has been sluggish, with a projection of 1.9% in 2019. The government cannot cut spending and expect the economy to grow.

Fourthly and very fundamentally, 2019 Budget is very small. The size of the budget is not sufficient to stimulate growth of the economy, create jobs and alleviate poverty. The planned total expenditure of N8.83 trillion is lower than 2018 budget by approximately N290 billion. The Federal Government is contracting the economy whereas in a period of recession, governments MUST spend more to have meaningful impact on jobs and poverty.

The budget is also very low in relation to the size of the Nigerian economy, which is estimated at approximately N150 trillion. This means that the 2019 budget is barely 6% of GDP. (Compare Bangladesh 15.30%, India 12.74% and Afghanistan 11.9% in 2017). Again, this will have no meaningful impact on jobs and poverty.

Fifthly, Nigeria’s fiscal crisis persists and fiscal position of the Federal Government, and by extension, the states and local governments remains precarious. First, projected revenues of N6.97 trillion are 3% lower than 2018 and second, the oil sector continues its dominance as it contributes 54% of the budget revenues. The non-oil sector is expected to contribute only 20% of the budget revenues. There are no coherent and comprehensive plans to expand the resource horizon of the Federal Government.

As a result of the brewing fiscal crisis, budget deficit remains high at N1.86 trillion. This is equivalent to 21% of the budget and 1.3% of GDP. The implication is that the Federal Government will need to borrow more in 2018 to implement the budget. Debt Service is already putting a strain on government revenues. The sum of N2.14 trillion has been provided for debt service. This means that 30% of projected revenue will be used in debt service.

It is therefore putting it mild to say that the 2019 proposed budget is not developmental, will not pull Nigeria from the abyss and may, indeed accentuate the misery and hopelessness the Nigerian people have lived with since 2015.

There must be an alternative to this Budget. Nigeria needs a government which understands how to run the economy in order to Get Nigeria Working Again. Fortunately for the country, the Atiku/Obi team has exactly that capacity and experience.

For the avoidance of doubt, an Atiku Presidency, come 2019, will present to Nigerians a people’s budget that will prioritize and focus on the twin challenges of unemployment and poverty. Nigeria’s high rates of unemployment, poverty and inequality represent both a significant distortion in the economic system and a lost opportunity for critical national development and could potentially threaten social stability.

Resolving these thorny issues requires significant departure from the APC-led government’s ways of doing things. #TheAtikuPlan will accelerate growth rather than contract the economy to steer Nigeria out of recession and to create opportunities for our youth to be self-employed. The private sector will be a critical driver of economic growth and #TheAtikuPlan will therefore act expeditiously to create a supportive and enabling environment for businesses to invest and thrive.

We shall disrupt and improve the budgeting process to facilitate more effective budget impact on the economy by increasing, significantly, the share of capital expenditure in the budget to a minimum of 40% in the first instance. To facilitate increased capital spending, we shall improve spending efficiency by cutting on recurrent expenses, by ensuring the judicious utilization of all borrowed funds for economic diversification and infrastructural development and by promoting more Public Private Partnerships in critical infrastructure funding.

#TheAtikuPlan recognizes that Nigeria’s current unprecedented fiscal crises, characterized by rising debt levels and revenue short falls, have resulted largely from APC-led government’s poor management of resources. We shall therefore undertake significant fiscal re-structuring including a review of the current subsidy regime and of the monumental losses to the economy arising from leakages from the operation of the foreign exchange market, in order to channel resources into the critical sectors of the economy.

#TheAtikuPlan Will Get Nigeria Working Again.