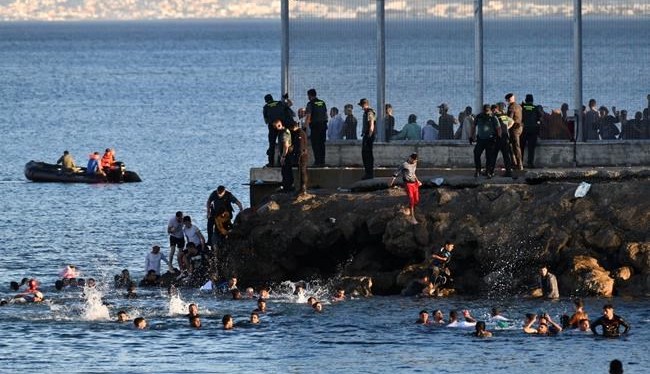 At least 6,000 people including 1,500 minors reportedly swam from Morocco to the Spanish enclave of Ceuta in the largest influx of illegal migrants there in a single day.

Spanish authorities said on Tuesday the migrants reportedly came from two locations, with some entering southern Ceuta at Tarajal beach and a larger group entering the north of the city at Benzu beach.

A spokesman for the Spanish government added that one man drowned in the process.

At both locations, migrants swam around rocky breakwaters jutting out into the Mediterranean that marks the border between the two countries.

Ceuta is an enclave of some 84,000 Spaniards on Morocco’s north coast and, crucially for migrants attempting to enter the area, it is on European Union soil.

“I have never seen a situation like this one, it is unprecedented, I have never felt so frustrated and sad,” Ceuta President, Juan Jesus Vivas, told Spanish broadcaster TVE.

.”This is a chaotic situation, so chaotic that we can’t tell the exact number of migrants at the moment.

“We need to gather all the ones who have arrived and allocate them in a specific location, so they are not just wondering around the border.”

The Red Cross has been assisting migrants with dry clothes, blankets and food at Tarajal beach.

Red Cross spokesperson, Isabel Brasero, said the migrants included babies and so far, all who made the journey around the breakwater appear to be in good health.

She added that the migrants were probably helped by favorable weather and the short distance they swam.

In his reaction to the development, the Spanish Prime Minister, Pedro Sanchez, said he would travel to his country’s enclaves on Morocco’s north coast of Ceuta and the city of Melilla, which lies further east, to “reinstate the order.”

He said Spain would return “immediately” all those who entered illegally as allowed by existing agreements between Spain and Morocco.