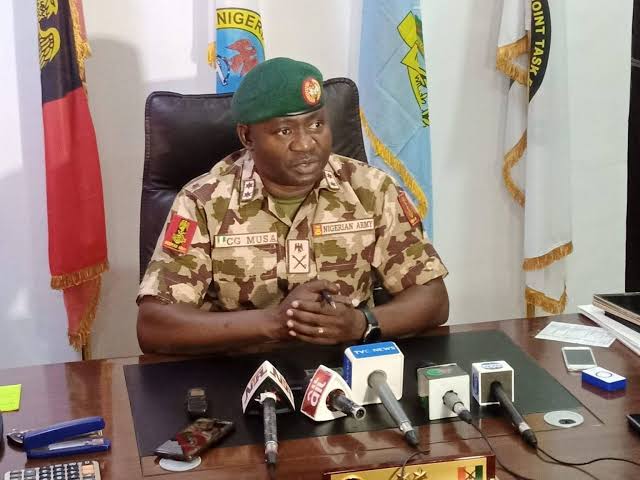 The Nigerian Army says sustained operations by troops in the North-East has seen not less than 60,000 Boko Haram and ISWAP terrorists and their families surrender to the government in the last one year.

The Theatre Commander of Operation Hadin Kai, the counter-insurgency operation of the military in the North-East, Maj. Gen. Christopher Musa who disclosed this on Monday in Maiduguri, the Borno State capital while briefing newsmen on the progress of the war against terrorism, said those who surrendered were both combatant and non combatant insurgents and their families.

Gen. Musa attributed the success of the military to the new wave of bombardments of the terrorists enclaves in the region which started July 2021, and led to serious degradation of the insurgents and the death of many of their commanders.

“Over 60, 000 insurgents have surrendered to the government in the last one year,” Gen. Musa said.

“These include both combatants and non combatants and their families. There are about 12,000 men among them. The rest are women and children,” he said.

The Theater Commander said the manner at which Boko Haram and its splinter group, ISWAP, keep producing children through either their wives or women abducted and forced into marriage shows the insurgents are building up a generation of terrorists for the future.

“What they are trying to do is to produce a generation of terrorists. When a woman puts to bed, she takes in again four months later. They have almost 30,000 children. You can see what they are building up.

“It is dangerous because when they grow up there in the bush, they will believe terrorism is normal and thus is quite dangerous to the nation,” he added.