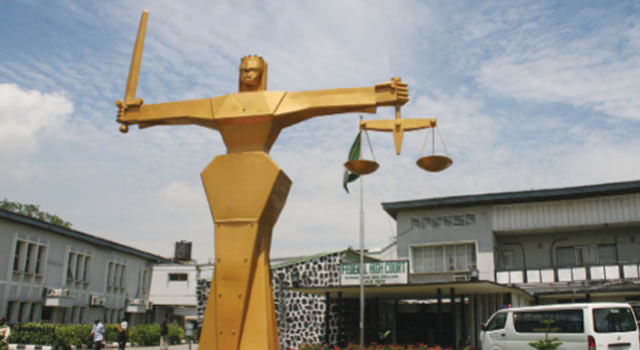 An Ikeja Magistrate Court has remanded a 61-year-old man, Rotimi Ariremako, has been remanded in prison custody for allegedly belonging to an armed robbery gang alleged to havd stolen a bus filled with goods valued at N15m.

Ariremako, who was arraigned on two count charge bordering on armed robbery, was said to have committed the offense on November 9, 2018, alongside others who are still at large.

The police prosecutor, Michael Unah, told the court that the defendant and his gang attacked the driver of a J5 bus with number plate EPE 476 UX, which was en route Jos from Lagos.

Unah said: “On getting to Ile-Ife, Osun State, the robbers attacked the driver and made away with the bus as well as the goods contained in it to an unknown destination.

“They also took the driver’s phone, which was used in tracking down the suspect.”

In his defence, Ariremako who said he is a scrap collector, however claimed that he picked the phone from the ground without a SIM card in it.

According to him, he did not make a report at the police station for fear of being tagged a thief.

The police prosecutor said the offences contravened sections 297(1) and 297(2)(a) of the Criminal Law of Lagos State, 2015.
The charges read: “That you, Rotimi Ariremako, and others now at large, on November 9, 2018, around 5.30pm along the Lagos-Ibadan Expressway, in the Lagos Magisterial District, did conspire among yourselves to commit felony to wit; armed robbery.

“That you, Rotimi Ariremako, and others still at large, on the same date, time and place, in the aforesaid magisterial district, did rob one J5 bus with number plate EPE 476 UX, conveying 169 cartons of different goods made up of eight cartons of new shoes; 150 cartons of Action Bitters; three cartons of hair attachment; three cartons of plate; two sacks of men boxers; and other goods with total value of N15,000,000, properties of one Ekwu Otukpa.”

The presiding magistrate, Mr A. A. Fashola, who adjourned till April 8, 2019, ordered Ariremako to be remanded in prison custody and that the case file be sent to the Director of Public Prosecutions for advice.

Drag sick ex-NBC DG to court even if it’s on a stretcher, court orders