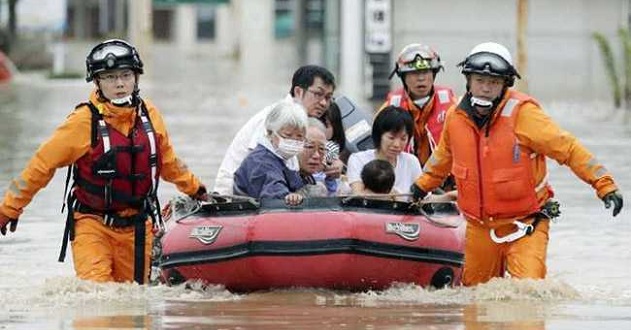 Heavy rains pounded the western part of Japan with three times the usual precipitation for a normal July.

This claimed no less than 62 lives, left dozens missing and also destroyed property worth millions.

Reports say the heavy rains caused widespread flooding, set off landslides and also sent rivers surging over their banks, trapping many people in their houses or on rooftops.

The rains have reportedly forced several millions of people from their homes, with more rain set to hit some areas for at least another day.

“We’ve never experienced this kind of rain before,” an official at the Japanese Meteorological Agency told a news conference. “This is a situation of extreme danger.”

Japan’s national broadcaster NHK revealed that at least 62 people were dead and 44 other are missing.

Among the missing was a nine-year-old boy believed trapped in his house by a landslide that left at least three others dead, one of them a man in his 80s.

An emergency management centre has been set up by the Japanese government at the prime minister’s office with some 54,000 rescuers from the military, police and fire departments dispatched across a wide swathe of southwestern and western Japan.