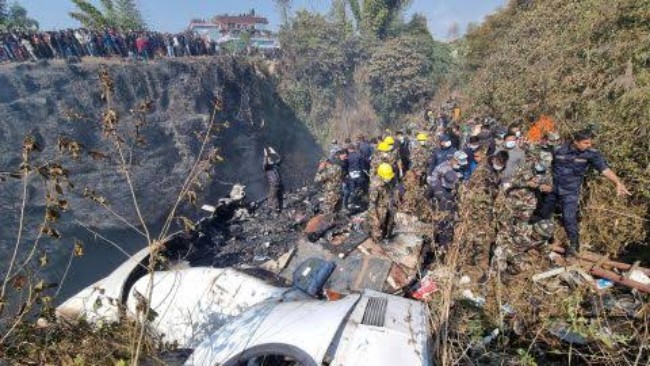 Not less than 67 people have been confirmed killed after a Nepalese plane carrying 72 people from the capital, Kathmandu, crashed in the Pokhara region on Sunday morning, the police said in a statement.

According to the police, the plane had 68 passengers including six children, and four crew members on board when it crashed between the old and new airports in the city located in western Nepal.

“Thirty-one bodies have been taken to hospitals,” police official AK Chhetri said, adding that 36 other bodies were found in the gorge where the aircraft crashed,” the statement said.

“On board the plane were 15 foreign nationals, including six children, 53 Nepalese, 5 Indians, 4 Russians, 2 Koreans, 1 Argentinian, and one each from Ireland, Australia, and France were in the plane,” the Yeti airlines said in a statement.

According to the Civil Aviation Authority of Nepal (CAAN), the aircraft took off from Kathmandu’s Tribhuvan International Airport at 10:33 am.

“The plane was close to landing at the Pokhara airport, when it crashed into a river gorge on the bank of the Seti River.

“The crash happened around 20 minutes after the take-off, suggesting the aircraft might have been on the descent. The flight time between the two cities is 25 minutes.

“The plane caught fire as it crashed, and rescue workers were trying to put it out.

“We don’t know right now if there are survivors,” the airline’s spokesperson Sudarshan Bartaula told journalists.

A local journalist, Dilip Thapa, said rescue operations have been difficult because of the raging fire at the wreckage, while Prime Minister Pushpa Kamal Dahal, called an emergency cabinet meeting soon after the crash and the Nepal government has formed a five-member commission of inquiry to probe the incident.

Related Topics:Nepalplane crash
Up Next