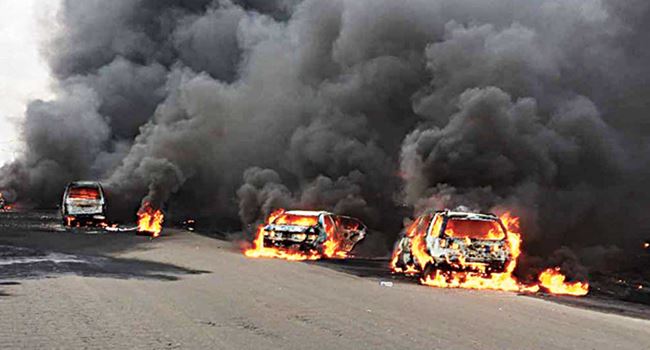 Seven men on Thursday were arraigned by the police in a Wuse Zone 6 Magistrate Court, Abuja, for allegedly attacking policemen on duty and burning four vehicles worth N3.7 million.

The Prosecuting Counsel, Mr Dominic Abba, told the court that the defendants on May 23, attacked Inspector Joseph Ogeodo and two others, who were trying to clear an accident scene on Abuja – Niger highway.

He alleged that the defendants, due to the incident, mobilised, conspired among themselves and attacked the policemen on duty and burnt down a Toyota Camry worth N900, 000 and a Chevrolet valued at N1.5 million.

After the defendants pleaded not guilty to the charge, he Magistrate, Mr Ibrahim Muhammed, admitted them to bail in the sum of N1 million each.

He adjourned the case until July 9 for hearing.

2 men in court for stealing valuables worth N2.67 million