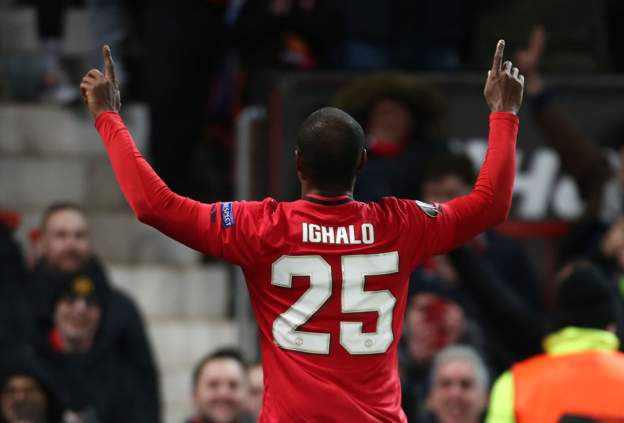 Nigerian striker, Odion Ighalo has expressed his delight with scoring his first goal for Manchester United since joining on loan in January.

The 30-year-old scored the second of five goals for the Red Devils against Club Brugge in the Europa League on Thursday night.

United won the game 5-0 against a 10-man Belgian side to seal qualification for the round of 16 of the second-tier continental competition.

“It was a great moment, I have been waiting for this since making my [full] debut,” said Ighalo, who has made four appearances for the club.

Read Also: ‘With time, the goals will start coming’ — Ighalo not under pressure

“I have it now and it starts my goal career here at the team I have supported since I was a little boy.

“It is a dream come true and I thank God for that.”

Manager Ole Gunnar Solskjaer also praised Ighalo for his effort in the game.

“Odion was up front there doing what he does. He’s a target man, we can play up to him, he can hold it and he’s got Bruno [Fernandes] and Juan [Mata] next to him so he’s got runners there,” he said.

“As a fellow striker myself, I know how important that first goal is.

“As the ball is played over to Juan, he spins and is on the six-yard line when Juan puts it there. That’s a natural striker.”

Ighalo played with much more confidence after he scored his goal.