'A president that is fighting corruption needs to be supported', Mbaka endorses Buhari | Ripples Nigeria 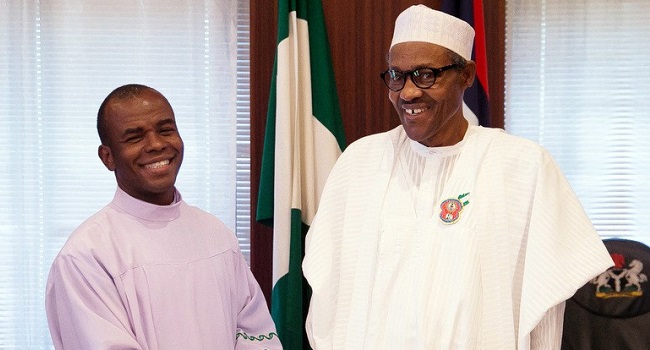 Mbaka’s endorsement was contained in his New Year message to Nigerians.

The Catholic priest said Nigeria has not had a president who has embarked on agricultural programmes like Buhari.

He said Buhari has addressed the clashes between herdsmen and farmers, as well as the challenge of banditry.

“A president that is fighting corruption need to be supported,” he said.

“We pray for President Muhammadu Buhari; he is a man who understands the situation. Since Nigeria started, we have never experienced a president that has agricultural programmes like him.

“For 16 years, the road from Anambra to Enugu was overgrown with weeds but within four years the road is being reconstructed and the same way they are doing it to Umuahia. This one that remembered us may God bless him.

“Four years doesn’t mean eight years; he has finished his four years, I pray for peaceful transition that he may complete his remaining four years. He will hand over to a better person, may the Lord keep him. When he was sick, he was almost dead and we said prayer and God granted him healing. God knows the purpose for allowing him to be alive; if God doesn’t want him, he could have died.

“The roads that were not going has started going. A lot of things are happening now which nobody knows. May the lord protect Buhari; it shall be well with our president.”

Mbaka had only recently scolded Peter Obi, vice presidential candidate of the Peoples Democratic Party (PDP), for failing to openly donate to his ministry, and went as far as saying Obi and Atiku Abubakar, the top of the ticket, may not end well.

This is the second time Mabaka is endorsing Buhari. He endorsed the president over Goodluck Jonathan in 2015.

Kidnappers, armed robbers, bandits are ‘on rampage’ in Katsina, Gov Masari cries out