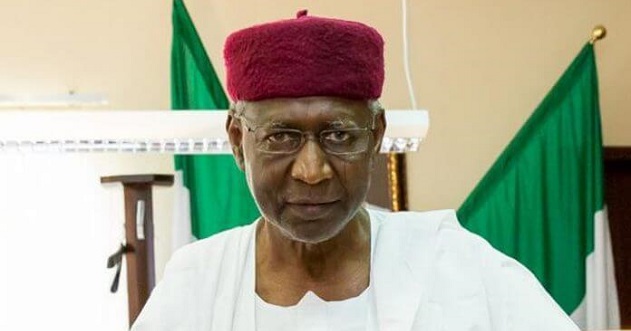 Last monday President Muhammadu Buhari held a closed-door meeting with the embattled Service Chiefs inside the Aso Rock Villa in Abuja. All the security heads were reportedly in attendance as usual except the National Security Adviser, (NSA), retired Major-General Babagana Monguno. The reason unofficially advanced for his conspicuous absence was understandable given the recent development at the federal power circles. Gen. Monguno had, prior to the crucial security meeting, penultimate week, ‘rebelled’ against the rudderless establishment nay, the known cabal around the Buhari presidency. What the retired senior army officer did was unprecedented in the history of the Nigerian presidency.

In a leaked scathing memo he had written and addressed to the Serive Chiefs and the President himself NSA Monguno had taken umbrage at the usurpation of power by the controversial Chief of Staff (CoS) to the president, Abba Kyari. He detailed how the CoS had been abusing power by meeting officially with service chiefs, diplomats and other high-ranking officials without any clearance from any superior quarters. Monguno claimed that Kyari had been acting outside the purview of his office by taking crucial decision(s) for the President without consulting or getting permission from him or the head of state. This, he said, was wrong. And we agree.

When President Buhari was ‘re-elected’ last year he had explicitly told his Ministers, upon their appointments or re-appointments, that they must henceforth pass through the almighty Kyari before getting to him! Abba Kyari as a leading member of the dreaded all-powerful cabal calling the shots behind the scenes at the presidency, had worked hard, indeed, to be considered as the veritable Prime Minister or Vice-President in a system northernised. Given Buhari’s unofficial ‘abdication’ someone as ambitious as the CoS should be seen to be doing the ‘right’ thing by cornering power for himself and his cronies.

For years now we have known that a cabal existed at the Buhari presidency but we never knew the profound extent the system had been compromised. Now with the explosive leaked memo emanating from the NSA it is clear that Abba Kyari has ‘seized’ power without firing a rifle! It could be labelled a ‘coup d’etat’ with the passive or active support of the man Nigerians ‘elected’ to pilot the national affairs.

A surrogate presidency was obviously put in place when it became clear to the cabal that Buhari was not up to the job. Besides when he took ill and spent months marooned in a London hospital Kyari and his gang began the gradual process of pulling the strings from behind taking critical decisions and passing them over to the insentient Buhari to sign off on them! The First Lady, Aisha, saw it then and raised alarm but Buhari, upon recovery, dismissed her outcry.

Whilst security issues are mounting across the federation the service chiefs appear to have impressed the President with their poor performance. But then what do you expect from a President Pa Ayo Adebanjo, the Afenifere Chieftain and elder statesman described recently as “an illiterate”, who “did not know what restructuring means, he is less concerned about the future of Nigeria, he is only bothered about his cows”.

For the presidency, however, the Libyan internecine war must be blamed for the ubiquitous insecurity in the land. So that means that before Colonel Muammar Ghaddafi died Nigeria was a haven of peace and national concord? Boko Haram started their murderous adventure after the demise of the Libyan strongman with weapons stolen from the armories in Tripoli and Benghazi? The Fulani herdsmen started carrying arms upon the demise of the dictator?

While it is considerably admissible that the Libyan post-Ghaddafi military conflict has aided and abetted the illegal uncontrollable circulation of conventional armament across the sub-Saharan Africa porous borders blaming the generalised insecurity (including banditry, kidnapping) wholly on the failed state of Libya is at best disingenuous. A better argument is called for.

President Buhari does not appear like a leader who knows how to hire and fire! Perhaps he is counting on the loyalty of the northern men heading the different security agencies of the state. Yet loyalty, it must be conceded, is not enough to warrant overlooking performance. Anyone could be loyal to the system in general or the man on top in particular if they demonstated leadership or patriotism in discharging their executive duties. Iron sharpens iron!

Abba Kyari acts with audacious impunity knowing fully well that his ‘boss’ is incapable of deciphering complicated matters on his presidential table. The former is always called in, therefore, to crack the presidential codes and provide solutions to the issues of the day. In doing this Kyari remains the most important man in the Buhari presidency, the constitutional power hierarchy nothwithstanding.

With the Monguno exposure any doubt about the fact that President Buhari is not in total charge of the country has evaporated. By his laxity, President Buhari wittingly or unwittingly degrades the presidency by allowing unelected appointees, nay the cabal, to run the administration by proxy. Yet it is inconceivable that in the end when this Buharian chaotic order ends history may not remember the sinister roles played by Kyari, Kingibe or Mamman Daura in wrecking the ship of state.

With the hierarchical cacophony at the summit of power we are headed towards the path of imminent national perdition. ‘President’ Abba Kyari and his cabal must be stopped before they wreck more havoc to the ship of state.