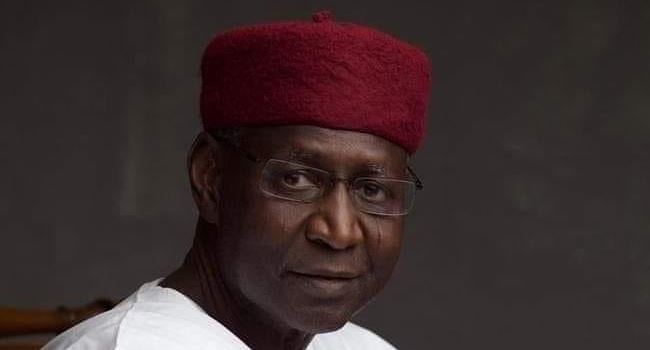 He was perceived as the strongest man in the Buhari presidency.

The tweets from Shehu Garba, Senior Special Assistant to the President on Media and Publicity, announcing Kyari’s death, no doubt, drew the curtain effectively on the life and personality of a man who had remained actively in the consciousness of the Nigerian populace for almost five years.

The late Abba Kyari meant different things to different people. However, for a majority of Nigerians, he was the embodiment of whatever the administration of President Buhari represents, either for good or for bad.

A Kanuri from Borno, not much is known about Kyari’s early days. But a quick search shows him as well educated, and an aristocrat by Nigerian standards.

Kyari joined the law firm Fani-Kayode and Sowemimo and worked there for some time after his return to Nigeria.

From 1988 to 1990, he was Editor with the New Africa Holdings Limited, Kaduna. He was to later serve in 1990 as a Commissioner for Forestry and Animal Resources in Borno State.

From 1990 to 1995, Kyari was the secretary to the board of African International Bank Limited, a subsidiary of Bank of Credit and Commerce International, from where he became an Executive Director in charge of management services at the United Bank for Africa, and was later appointed the Chief Executive Officer.

In 2002, he was appointed a board director of Unilever Nigeria, and later served on the board of Exxon Mobil Nigeria.

Kyari was appointed the Chief of Staff to President Muhammadu Buhari in 2015, a position he held till his demise on April 17, 2020.

Kyari’s work as Buhari’s Chief of Staff, more than anything, exposed the nature of the man and his ability to engage in high-wire politics and power game. The immense power and influence he wielded made many to perceive him as the de-facto President of the Federal Republic of Nigeria.

His power and influence within the Buhari administration, however, did not come without a handful of controversies that may continue to form talking points. Perhaps, that which has stuck most poignantly is being mentioned as a member of an imaginary cabal within the Buhari Presidency.

The word cabal has always been associated with every President since the return of the country to constitutional democracy, mostly to describe what used to be known as kitchen cabinet or right hand men who have the ears and attention of the President.

However, under President Buhari, the cabal and its meaning took a twist, as it usually referred to Abba Kyari or, on other occasions, alongside Mamman Daura, the man credited for cementing his relationship with Buhari.

As the President’s closest aide, Abba Kyari, either rightly or wrongly, got the blame for the president’s actions, especially those considered to be less than appropriate.

This feeling, curiously extended to the First Lady, Aisha Buhari, who fought bitter battles with the late Kyari and his benefactor, Mamman Daura.

For Mrs Buhari, Kyari represented the worst about her husband’s administration, accusing him of hijacking the government, especially in the first tenure of the administration.

Nigerians will readily remember the highly popular statement attributed to Mrs Buhari when she claimed that the government had been hijacked by a cabal, and that most of those appointed by her husband into his cabinet were not known by him! Such was one of the controversies that trailed his service as the President’s Chief of Staff.

Governor Nasir el-Rufai of Kaduna State was one of the first persons who took Abba Kyari to the cleaners and set the tone for what continued as a dogged time in office.

In a memo said to have been written in September 2016 by el-Rufai to President Buhari, the Kaduna State governor took the sacked Secretary to the Government of the Federation, Babachir Lawal and Kyari to the cleaners, accusing them of being clueless and inexperienced.

Read also: ‘I hope to be back to my desk soon’, the last thing Abba Kyari told Nigerians

El-Rufai wrote: “You appear to have neither a political adviser nor a minder of your politics. The two officials whose titles may enable them function as such generally alienate those that contributed to our success. The SGF is not only inexperienced in public service but is lacking in humility, insensitive and rude to virtually most of the party leaders, ministers and governors. The Chief of Staff is totally clueless about the APC and its internal politics at best as he was neither part of its formation nor a participant in the primaries, campaigns and elections. In summary, neither of them has the personality, experience and the reach to manage your politics, nationally or even regionally.”

If anything called the integrity of the Buhari administration to question, putting a dent not just on Kyari’s person but also that of the entire administration, it was the alleged N500 million bribe from telecommunications giant, MTN Nigeria.

The Nigerian Government, through the Nigeria Communications Commission (NCC), had fined the company $5 billion for a security related infraction. Words, however soon came out that the Chief of Staff to the President had been paid N500 million in bribe to help cut down the fine and make the Nigerian Government more pliant.

Though Kyari tried strenuously to deny the allegation until his death as no concrete investigation is believed to have bee carried out on it. The accusations remained a sore thumb for him.

There are many Nigerians who still stubbornly believe that Kyari actually took the bribe, especially with the eventual drastic reduction in the amount of fine MTN eventually paid.

Early in the year (2020), a memo Babagana Monguno, the National Security Adviser, wrote to service chiefs in the country, accusing Kyari of meddling in matters of national security, surfaced.

In the memo, Monguno warned all service chiefs to desist from taking further directives from the President’s Chief of Staff.

In the memo dated December 9, 2019, the NSA accused Kyari of issuing directives to the service chiefs without the knowledge or approval of President Muhmmadu Buhari.

He said: “Chief of staff to the President is not a presiding head of security, neither is he sworn to an oath of defending the country.

“As such, unprofessional practices such as presiding over meetings with service chiefs and heads of security organisations as well as ambassadors and high commissioners to the exclusion of the NSA and/or supervising ministers are a violation of the Constitution and directly undermine the authority of Mr President.

“Such acts and continues meddlesomeness by the chief of staff have not only ruptured our security and defence efforts, but have slowed down any meaningful gain that Mr. President has sought to achieve.”

The memo by Monguno, though frowned at by many Nigerians, only helped to justify the belief by many that Kyari was actually the de-facto President, the unseen hand that managed the affairs of the most populous black nation in the world for five years.

Abba Kyari, no doubt, had a fair share of power, influence and affluence, with a generous dose of controversies while he journeyed on mother earth. He may have been mired in a couple of issues but his footprints will remain indelible.

No thanks to the COVID-19 pandemic, an eventful life got terminated and the man of power, influence, and Nigeria’s most powerful Chief of Staff is now history!