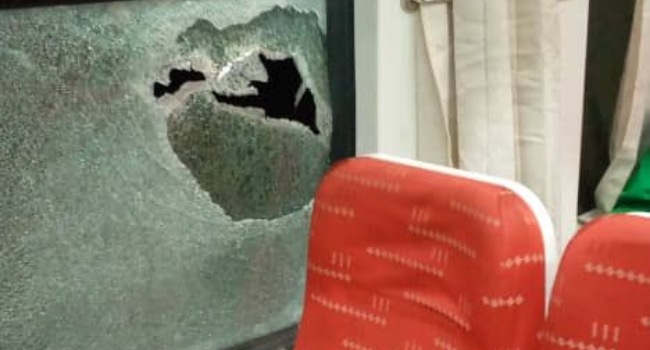 An Abuja-Kaduna train was reportedly attacked on Monday, when suspected hoodlums threw stones at it shattering its glasses.

Some Nigerians had gone on social media alleging that the train was attacked by bandits, who were later repelled by security forces.

However, the Nigerian Railway Corporation (NRC) in a statement on Tuesday, refuted the reports that the train heading for Abuja on Monday was attacked by bandits.

Read also: UPDATED… One person dead, as train rams into bus in Lagos

The corporation also said that one of the suspects has been arrested, adding that it had reached out to security agencies to ensure that such incidents do not reoccur.

“There was no bandits attacks on the train, it’s just a rumour otherwise they will see the bullet all over the train. It was hoodlums that threw stones on the train and because the Police got one suspect, at night more hoodlums came out to attack the train in protest against the arrest made in the afternoon.

“We however, urged the public using the train not to panic, as the Minister of Transportation and NRC will ensure safety of Nigerians on that route”, the statement noted.