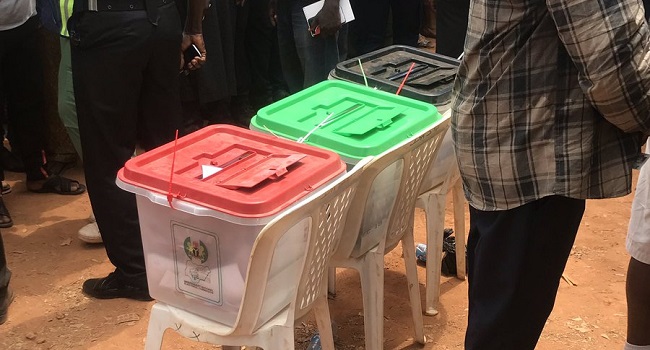 Reports show that the Peoples Democratic Party (PDP) is taking the lead in some polling units in Gwarinpa Estate in the Local Council elections in Abuja on Saturday. The All Progressives Congress (APC) is however following closely behind.

The presiding officers announced the results in the various polling units in the estate.

At the Gwarinpa Model City gate polling unit 013B, Presiding Officer Nwankwo Bede announced that for Chairmanship, Princess Vivian Anazodo of the PDP got 119 votes while APC’s Abdullahi Candido got 55 votes. For the seat of Councillor, the PDP scored 112 votes while the APC scored 54 votes.

The Gwarinpa Model Primary school polling unit 024, Presiding officer Sebastine Ebuka announced that for the seat of Chairman, the PDP got 143 votes while the APC got 130 votes. APC, however, took the lead in the councillorship seat with 140 votes while the PDP scored 134 votes.

At the Gwarinpa Polling Unit 024A, the APC also took the lead for both the chairmanship and councillorship seats.

It was a hitch-free and orderly polls in the Gwarinpa District as accreditation and voting ended before 2 p.m., with collation and counting commencing immediately.

Pleased with the outcome of the election process, voters attributed the success to early arrival of ad hoc staff of the Independent National Electoral Commission (INEC) and early commencement of voting.