Home » Metro » ABUJA: The story of women who have resorted to street begging to survive 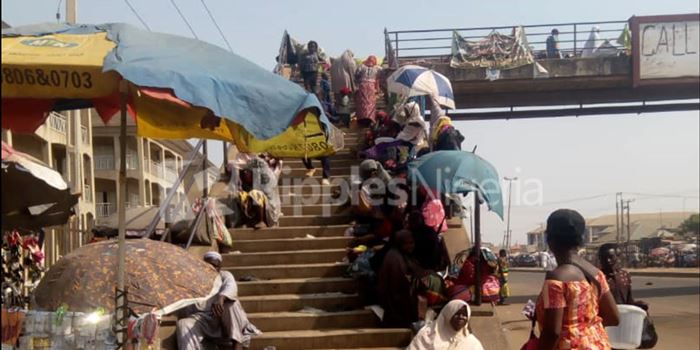 It was 10am somewhere in the ever bustling city of Mararaba, Abuja- Nigeria’s Federal Capital Territory. While many went about their daily duties, Mama Baraka, 43 sat on one side of a flyover, constantly stretching forth her hands as passer-byes climbed up and down. The sun was blistering hot.

She had come out earlier but does not intend to leave anytime soon. Seated with her, were some children I would later discover, belonged to her.

As I tried to use the flyover to cross to the other side of the road, one of her children- the last among them held me firmly and said “uncle please help me and my mother. We have not eaten today. We are hungry. If you help us, God will bless you”. I obliged. But I wanted something more- to tell their story.

Every morning, Baraka as she is fondly called, comes out with her children to the flyover, where they sit and wait for passer-byes who either give them money or food items. In order to attract the attention of people sometimes, they sing in their traditional Hausa tone. 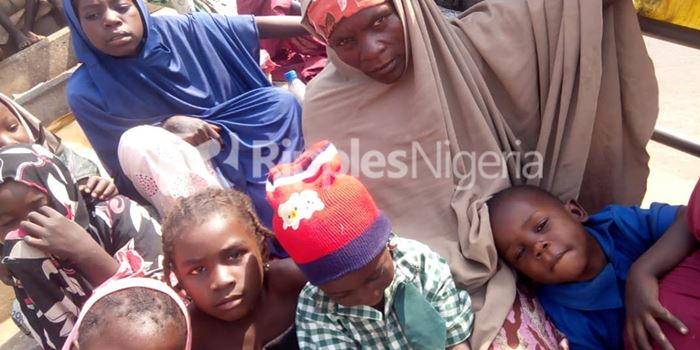 Mama Baraka and her kids

They do not have shelter over their head. And so, they have to wait everyday till the evening hours when owners of shopping malls and other stalls around return home after the day’s transactions before they go to sleep, exposing their body most times to extreme weather conditions.

Every day, Baraka comes out with the hope of making money- that will be enough at least to take care of her basic necessities of food, water and soap. But she tells me she often gets disappointed when nothing comes in.

“Anytime we don’t get anything from anybody, we just go home and sleep without eating and when my children complain they are hungry, I tell them to wait till the next day, hopefully, we will get something. I see that as part of life” she said.

Globally, over three billion people,  50% – live on less than $2.50 (N900) a day and despite having one of the world’s highest economic growth rates, averaging 7.4%, over  86.9 million Nigerians live in extreme poverty representing nearly 50% of its estimated 180 million population.

By this figure, Nigeria has overtaken India- which has five times its population- as the country with the most extreme poor people in the world according to a new report by The World Poverty Clock.

In 2015, the UN set up the Sustainable Development Goals, and the first of them is to “eradicate extreme poverty for all people everywhere by 2030”. To achieve this globally, 90 people need to leave poverty every minute to eradicate poverty totally by 2030; and to achieve this in Africa, 57 people have to leave every minute; and in Nigeria, 12 people per minute.

The opposite however seems to be the case as nine people on the average, are entering extreme poverty every minute, and Nigeria alongside the Democratic Republic of Congo are both responsible for the nine.

For Nigeria, this is due largely in part to population which confirms the submission by the World Poverty Clock that Nigeria’s rising overpopulation will pose a problem now, rather than in 2030 or 2050.

Baraka talks of how she left Daura in Nigeria’s North West state of Katsina, where she was formally making kuli kuli-a northern Nigeria snack that is made from dry and roasted groundnuts-after her husband got involved in a ghastly road accident three years ago, and later died.

She tells me in a somewhat jittery tone that everything was just fine when her husband was still alive because he always made efforts to provide for her needs, and that of her children. But after he died, life took another dimension. There was no money to move on. 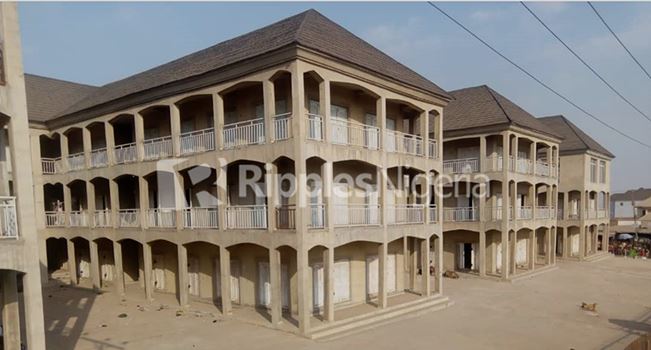 “After his death, there was nothing to do. I had spend my whole money trying to save his life. We had no food to eat and so I had to come down here with my children after a friend advised me. I did not want to remain at home doing nothing” she said, recalling how things became difficult for her.

In early January, one of her daughters became ill at some point and she almost lost her because there was no money. All thanks to the man, whom she described as” God sent” who helped her with some money and saved the life of her daughter.

Now, two of her children have to sell sachet water on the streets- a business which she started with the little money she made from begging. But she hopes they will stop soon and things will get back to normal.

She described her experience in the past three years as harrowing and said she wants her children to go to school, become educated and better citizens so they can bring joy to her soul.

Barraka is not the only one. There are other women like her, with children, who could barely feed every day.

Garba’s last child has missed home and wants to return

Sitting next to Baraka was Aba Garba who listened with rap attention as our conversation moved on. As soon as I was done with Baraka and before I could turn, she called out to me. She apparently had her own story to tell.

Garba, now 30, left Kano in Nigeria’s North West after her husband died, having suffered from an ailment for three years. After the death of her husband, she had to come down to Abuja with four out of her eight children, leaving the remaining four behind.

She explained that she had a petty business she was using to manage herself and support her family with the little her husband was bringing to the table before he became ill, and she had to spend everything and even borrowed to save his life. Yet he died.

“I have not been to this place and I never dreamt of coming here. But after my husband died, I had no option than to come down with some of my children as there was nothing to do at home. I needed something I could do to take care of the children since their dad is not here anymore” she said.

She clearly recalls the occasion when one of her children, Usman- the last among them who is just three cried uncontrollably and asked her to take him home so he can see his brothers and play with them.

“I promised him I was going to do that. I have been trying to gather money to take them home to at least spend some time before we come back again.  “It has not really been easy for me here. We are facing too much problem. Whoever you see sitting here has one problem or the other. Nobody would ordinarily love to come out here and sit in this hot sun everyday”, she narrated.

Each time she gets money and food items, she sends some of them home to the rest of her children who are attending Islamic school. She said she does not want them to feel the absence of their father.

Just like Baraka, Garba and her children pray before coming out every day. But some days end without anyone looking in their direction, and they end up returning home just the way they came out, with no hope of food for the day. 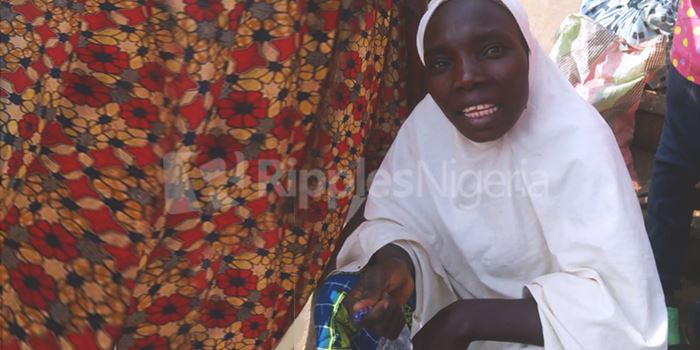 “We come out hoping that the day will be better. But nothing happens. We still give thanks to God for everything. That is the best we can do. We just keep hoping that someday, our situation will change” she said, a glimmer of hope running through her face.

Mariam Lawal, 40 took a decision to leave her husband’s house in Kaduna, Northern Nigeria, about a year ago. Her reason was that her husband could no longer provide for the needs of his family after he got married to a second wife.

“He got married to another wife when he knew that we were barely struggling to survive, and since then, things have spoilt. His new wife even ran away because she could not bear the lack anymore”, she explained.

After she left her husband, Lawal explains, with her baby resting on her lap, that she decided to come down to Abuja where she met some of her friends who told her she could beg to earn money and take care of herself and her children.

She tells me that she has been there for eight months now, but that she wants to get married to another man as she cannot keep suffering like this with her two children. “When I get married, my husband will provide everything I need. I will eat well and take care of my children too” she said, giggling.

The future of a generation threatened

Garba’s children are obviously up to school age. They ought to be in class rooms. But here they are, sitting on a flyover with their mother and begging for money. She says it is the most unfortunate thing that could ever happen to her.

It is not just years of combined attacks by Boko Haram in North-East Nigeria and heightened herdsmen attacks in the North Central states that have led to an entire generation of children missing out on education.

Hussaini Abdu, country director at Plan International in Nigeria, an independent development and humanitarian organization which has been working in Borno and Adamawa states to support children who left school due to insurgency to recommence their studies by providing school materials and training teachers, believes that without education, children are at risk of being seen as an ideal recruitment pool for extremist organizations, or criminal gangs.

For children like Garba’s, who are not in school, and have lost their dad with almost nothing to hold on to, there is an ever increasing risk of becoming members of deadly sects who often recruit children and use them to carry out series of destruction.

“Two persons have asked me to enroll my children into school as staying without going to school is most unfortunate and I risk losing them when they grow. I have always thought of that. I want them to go to school. But there is no money”. She tells me.