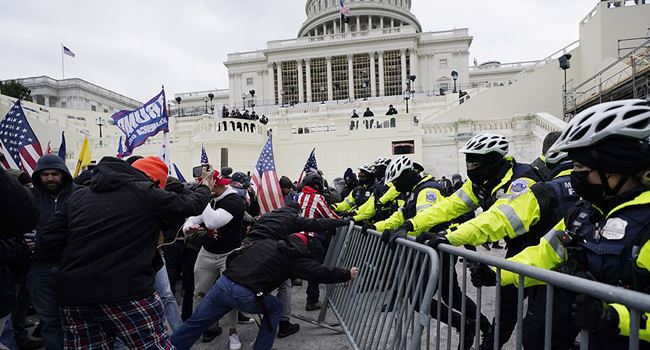 The former President of the United States of America, Donald Trump has been blamed by accused rioters who invaded Capitol Hill on the 6th of January for ‘inspiring’ the action.

Brandi Harden, the lawyer of one of the accused identified as Emanuel Jackson, who court filings describe as a “recently homeless”, wrote in a filing on Monday calling for pretrial release stating that Trump “roused the crowd by telling them ‘we will stop the steal’ and ‘you’ll never take back our country with weakness, you have to show strength, and you have to be strong … if you don’t fight like hell you are not going to have a country any more’”.

As such, “the nature and circumstances of this offense must be viewed through the lens of an event inspired by the President of the United States”, Harden wrote.

Other defendants who accused Trump of inspiring the invasion include; Jacob Chansley, also known as Jake Angeli, the “QAnon Shaman” who donned a horned headdress and face paint during the attack, and Dominic Pezzola, a member of the Proud Boys right-wing group who is accused of shattering a window in the Capitol with a stolen police shield so rioters could enter.

This came days after the newly elected President of the United States of America, Joe Biden said in a US media interview that Trump should not continue to receive intelligence briefings normally available to former presidents because of his “erratic” behaviour.

Nigerian model, Oluchi, threatens to deal with ‘enemy’ on IG