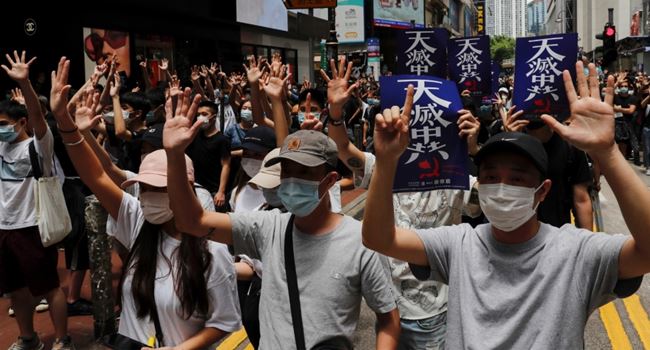 Scores of activists have raised fears after China’s parliament passed the controversial national security legislation for Hong Kong that Beijing says is necessary to deal with issues of terrorism, subversion and foreign interference.

But critics say the new legislation will outlaw dissent and destroy the autonomy and freedoms promised when the semi-autonomous territory was returned to China in 1997.

Joshua Wong, a leading activist, said on Monday that he was resigning as leader of pro-democracy group Demosisto and would continue his fight privately.

Writing on social media, he said the legislation marked “the end of the Hong Kong that the world knew before. From now on, Hong Kong enters a new era of reign of terror. With sweeping powers and ill-defined law the city will turn into a secret police state”.

Wong described himself as a “prime target” of the legislation. Colleagues Nathan Law, Jeffrey Ngo and Agnes Chow also said they would step down.

Reports say the new bill was passed unanimously by the Standing Committee of the National People’s Congress at a three-day meeting that began on Sunday, according to multiple media reports in Hong Kong citing unnamed sources. The draft of the law has not been made public.

This came after the President on the United States of America, Donald Trump moved to impose new sanctions on China after it imposed a security law on Hong Kong.

This was revealed by the US Secretary of State Mike Pompeo who said that the United States was imposing visa restrictions on Chinese Communist Party officials believed to be responsible for restricting freedoms in Hong Kong.