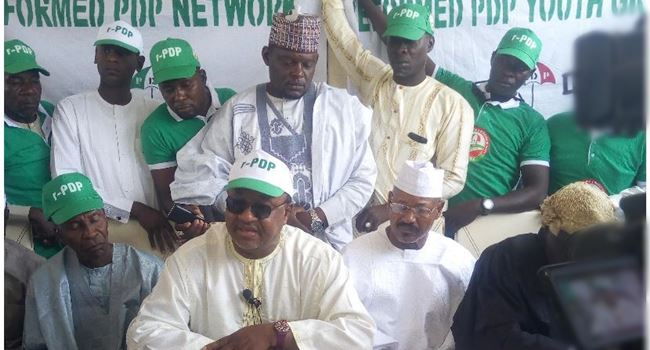 Amid efforts of members of the Nigerian Police Force to stop its inauguration, a new faction of the Peoples Democratic Party (PDP) named Reformed PDP (R-PDP) emerged in Adamawa State on Thursday.

Reports say the inauguration of the party was earlier scheduled to hold at the Lalewal Hotel in central Jimeta, but operatives of the Nigeria Police blocked members from entering the venue forcing members to convene at the house of its leader, Dr Umar Ardo, in Karewa, Jimeta.

The inauguration at the alternative venue was led by Dr Ardo (who has been the face of the R-PDP since the faction broke from the main PDP late last year), after addressing a press conference, on reasons for the breakaway.

While speaking during the pre-inauguration press briefing, Ardo said; “We call this World Press Conference to express our dissatisfaction with the unconstitutional way PDP affairs are being conducted in the state and maltreatment of members who object to such unconstitutional acts.

“It is against this backdrop that some well-meaning members have decided to take this current action.”

He highlighted the alleged unconstitutional acts of the mainstream PDP in the state, including dissolution of elected Executive committee of the party and “imposition” of the current one led by Barr Tahir Shehu.

Umar Ardo said, “In reconstituting the party’s state exco leading to the emergence of the so-called AT Shehu State Exco, all known democratic rules and parry guidelines were flouted.

“For instance, against the guidelines of the party, eleven members of the Adamawa State Caretaker Committee (as applicable during the era of Ahmed Makarfi as national caretaker chairman), including AT Shehu himself, simply transmuted into the state Executive committee, thereby denying interested party members from contesting,” he added.