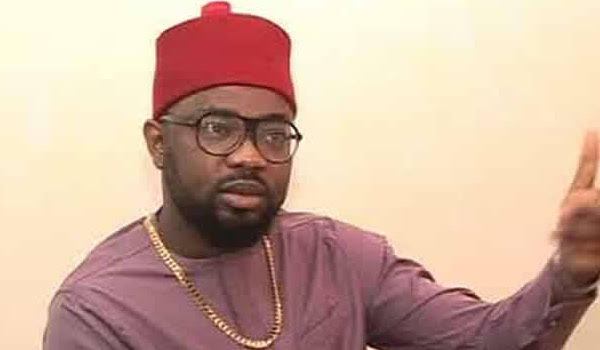 With the largest opposition political coalition in the country, the Coalition of United Political Parties (CUPP), currently enmeshed in serious crisis, the co-spokesman of the group, Comrade Mark Adebayo, has thrown a perspective on things.

Recently, there was a report on social media that some members of the coalition collected N100 million to ensure that the first national spokesman of the CUPP, Ikenga Imo Ugochinyere was removed.

Ugochinyere has consistently attacked the All Progressives Congress (APC) and even recently was arrested by the Department of State Security (DSS) following his allegation that Speaker Femi Gbajabiamila and some other Rep members got a bribe of $10 million from American Billionaire, Bill Gates to pass the contentious Infectious Diseases Control Bill before the House.

He had since been released by the DSS.

However, in what apparently appeared as a move to remove Ugochinyere, some stakeholders of the CUPP met and unveiled a new agenda aimed at repositioning the organisation into what they said was a purposeful, focused and result-oriented opposition body that would champion the cause of governance in the country.

The stakeholders decried a situation, the CUPP in the recent past, would inadvertently be allowed to become the possession of an individual, who turned it to a combatant opposition.

The stakeholders, in a communiqué issued at the end of the virtual emergency meeting which was signed by the Secretary, Steering Committee, High Chief Peter Ameh and Deputy Secretary, Steering Committee, Barr. Georgina Dakpokpo, said the coalition would be re-branded and repositioned towards clinching power in 2023 for the benefit of all partners and for the development of the nation.

A committee, to be chaired by Abdulsalam Abdulkadir and Dr Emeka Okengwu, was set up by the stakeholders to review the activities of the CUPP since after the 2019 election and draw a roadmap towards the 2023 elections.

But speaking to Ripples Nigeria on the crisis rocking the union, co-spokesman of CUPP, Comrade Adebayo said the ongoing crisis in the coalition “is the nature of political engagements, interactions and contestations all over the world.

Expressing optimism that the coalition would emerge stronger from its ongoing crisis, Adabayo, however, noted that the issues currently rocking the group, could destroy it before the 2023 general elections.

On the genesis of the crisis in the coalition Adebayo said, “You see, it’s a little bit complex. You will agree with me that the Grand Alliance which is CUPP has been very vocal against the current government and takes on it frontally about the comprehensive failures in policy, economy, insecurity, ethno-religious bigotry, incompetence and corruption. This has been done substantially through my colleague, Ikenga Imo Ugochinyere.

“Well, some members of the coalition aren’t comfortable with what they termed ‘combative approach’ or turning coalition members into ‘enemies of the state’. Sincerely, I am yet to understand what that second aspect of the complain is all about, I mean the ‘enemies of the state’ aspect. Nowhere in the world is the government a friend of the opposition because it is a contest for power in which the opposition positions itself to wrestle power in a democratic process from the incumbent. You become an enemy of the state if you want to take over power by means other than democratic. That’s not opposition, it is insurrection and fundamentally treasonous. That’s not what we have here now.

“However, the combative allegation has substance. I like the vibrancy of Ikenga’s interventions on behalf of the coalition on national issues but it’s not always that I agree with his styles. I believe he can be corrected and made to follow the opinions of the coalition members and critical stakeholders at a properly constituted meeting either directly of the highest decision-making organ of the coalition, which is the Steering Committee chaired by His Excellency, former Governor Olagunsoye Oyinlola”.

Further clarifying the causes of the crisis, Adebayo said, “Frankly speaking, it does appear that a leadership vacuum was created immediately after last year’s general elections after which the Steering Committee and other coalition organs went to bed leaving only the media department functioning at a constant accelerated capacity, if not continuously, driven by Ikenga.

“In such circumstances, errors are bound to happen inadvertently or deliberately. Ikenga is a young man. Even the Bible says you can’t leave young persons to their own devices. You have to provide constant guidance. Young folks possess this mental adrenaline rush that pushes them to the elastic limits when engaged in a cause they’re passionate about. I think he falls into that category.

“To make matters worse, no attention was paid to drafting a comprehensive Media Engagement Standard Operating Procedures that the spokespersons can use as a guide in their media activities. It’s all about personal initiatives. You cannot forestall this kind of crisis as happening now in that circumstance and definitely you can’t push all blames on one individual. It’s a collective responsibility”.

On the viral allegation by one Jackson Ude that some members of the coalition collected N100 million bribe from the APC to remove Ikenga, the CUPP co-spokesman said, “I don’t trade in nor believe in speculations. Give me concrete evidence that I can work with. All those mentioned as beneficiaries of the so-called bribe are, to the best of my knowledge, not hungry people who would dare ruin their political careers by doing something as reckless as that.

“They might be interested in getting Ikenga removed as spokesman, but I do not have any evidence to believe that they were financially induced.

“Similar allegation was made against Ikenga in one publication that I saw that he allegedly collected unspecified millions of Naira from the suspended EFCC Chairman, Ibrahim Magu, to do image laundering job for him. The relevant question is where is the evidence to that effect? You know it was Winston Churchill who said “in any situation of war, truth is the first casualty”. Same way for politics. Immediately acrimony is introduced into any crisis, facts and truths are no longer sacred. It’s unfortunate but that’s the reality of politics. It’s not limited to Nigeria, it’s a phenomenon happening all over the world even in the so-called advanced democracies”.

On the allegations in some quarters that he is one of those who want Ikenga out in order emerge as the sole spokesman of CUPP, Adabayo

“Far be it from me that I would be part of any illegitimate process to remove anyone from office in order to be a beneficiary. I’m not an opportunist who will aspire to reap from a product of an unjust and improper process. We know those who have the final authority on such matters. All I have done is to try to mediate, but everyone has refused to shift grounds. I can’t even be a beneficiary of anything because I have seen the handwriting on the wall that some coalition members are sidelining me in favour of another person they would like to take over as spokesman simply because I would not tow their hardline postures against Ikenga.

Noting that he and Ugochinyere emerged as CUPP spokespersons through the efforts of High Chief Peter Ameh, the secretary of the coalition, Adebayo maintained that he was not sure, the group might still want to retain him.

According to Adabayo, the current happening in CUPP “is unfortunate and very sad and could compromise the strength of the coalition before 2023 or even destroy it.”

“If it happens, each coalition member would have to pitch his/her tent where his/her political interests would be most protected. What can save the situation from getting out of hand is a direct intervention by the topmost leaders of the coalition like Prince Olagunsoye Oyinlola, Chief Tom Ikimi, His Excellency Liyel Imoke, Distinguished Senator Bukola Saraki, His Excellency Atiku Abubakar and others. Without that, the crisis would blow out of proportion and it’s already happening because a lot of unofficial decisions are being taken and unauthorized appointments made based on sentiments and over bloated ego”.