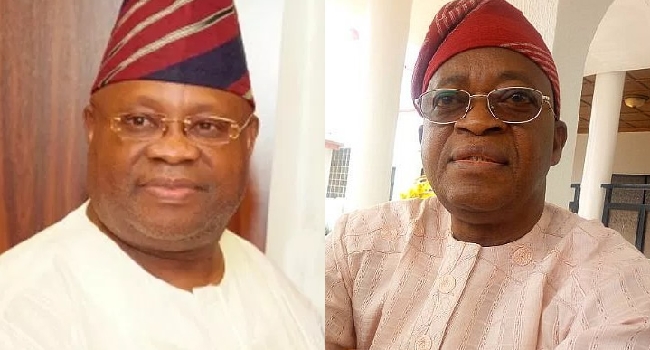 The series of events that played out immediately after the inauguration of Senator Ademola Adeleke as the new Osun State Governor has elicited reactions from the immediate past Governor of the state, Gboyega Oyetola.

This was as Governor Adeleke through his spokesperson, Olawale Rasheed, debunked the claim that the new administration has sacked workers and dethroned three monarchs in the state.

Speaking on a radio programme on Tuesday, Rasheed noted that the present administration only set up panels to review the appointment of workers into different capacities by the former administration.

He said: “There was never sack of any worker or traditional ruler. We only set up a review panel, it is impossible to sack and put a review panel in place.

“The review panel is to look at the numbers of the people that were employed, due processes of the employment, and qualification among other things.

“Those that were employed from July 17 till now are still at work presently, they have not been sacked. The staff audit will review their employment.”

However, former governor Oyetola who reacted to the claim in a statement issued by his spokesperson, Ismail Omipidan, described as ill-founded the claim that Oyetola-led administration employed 12, 000 workers.

The statement read: “The claim by the Osun Governor, Senator Ademola Adeleke, that the immediate past governor employed 12, 000 workers is not only false but unfounded.

“I, therefore, challenge the state government to publish the list of the purported 12, 000 workers. What is the entire workforce of the state?

“Once a lie is told, you need 1,001 lies to cover it up. In no distant future, the people of Osun will know who the real liars are.”

Governor Adeleke had few hours after his inauguration ordered the reversal of policies made by the former governor Rauf Aregbesola.

He also declared frozen all the operational accounts of the state till further notice.