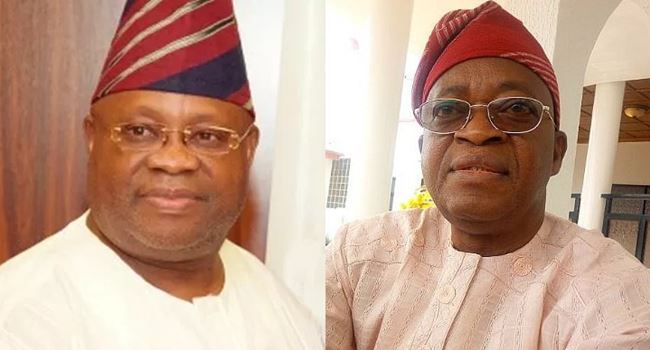 There is anxiety in Osun State, especially among supporters of Governor Adegboyega Oyetola as the Supreme Court is ready to rule on the result of last year’s governorship election in Osun State.

The competition has been between the candidate of the Peoples Democratic Party (PDP) Ademola Adeleke and the All Progressives Congress (APC) candidate Oyetola, who is the sitting governor.

Adeleke, through his spokesperson Olawale Rasheed boasted that the judgment will be in their favour.

“Our lawyers have made the points very clear that Senator Ademola Adeleke was the duly elected governor of Osun State and the tribunal has confirmed it.

“We are sure that the Supreme Court will finally stamp it by declaring Senator Ademola Adeleke as the governor of Osun State. We are confident that we shall win at the Supreme court.”

But Spokesperson for the APC in the state, Kunle Oyatomi, said, “We are hopeful of victory at the Supreme Court. We have observed prayers in all federal constituencies of Osun State and God will answer our prayers.

“We won the election and the Supreme Court will surely declare Governor Gboyega Oyetola as the validly elected governor by God’s grace.”