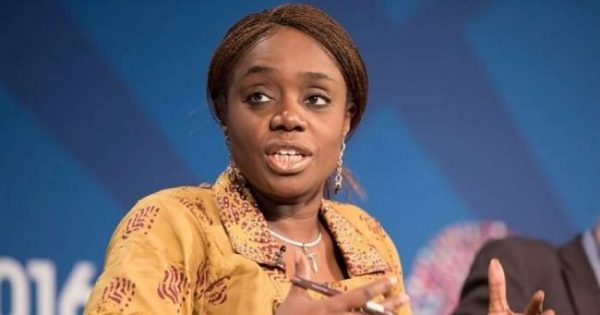 The Minister of Finance, Mrs. Kemi Adeosun has insisted that the federal government is not paying subsidy on petroleum products in the country.

She stated on Wednesday while answering questions from from newsmen at the Presidential Villa, Abuja, that technically, “there is no subsidy but there is under-recovery”.

According to her, this is so, because the Nigerian National Petroleum Corporation Corporation (NNPC) is currently doing all the importation.

Recall that the Group Managing Director (GMD) of the national oil corporation, Maikanti Baru had informed Nigerians last month during the height of the fuel scarcity experiences inbreeding country, that the landing cost of PMS (petrol) is N171 per litre.

He noted them, that in-spite of this, the corporation still sold to marketers at N131 to enable them sell to Nigerians at a pump price of N145 per litre.

But the Vice President Yemi Osinbajo had thereafter, while trying to douse criticisms that the government had quietly returned subsidy, explained that the cost of the subsidy was being borne by the NNPC, and not the federal government.

But speaking further on the issue on Wednesday, Adeosun said, “On the question of subsidy, the price of oil for Nigeria today is a double-edge sword. So every dollar that goes up, we get more revenue but also because we are importing refined petroleum, it increases the landing cost of fuel.

“So for every time we get excited that the oil price is going up, there is also a knock-on effect on the price of imported PMS and that is a function of us not having refining capacity. It is one unfortunate impact of that.

“Now, when there is talk of payment of subsidy, technically today, there is no subsidy but there is under-recovery. Why that is so is because the NNPC is currently doing all the importation.

“They are importing at a higher price than they are selling, which means they are losing money, which means effectively that that loss is being borne by everybody and effectively it reflects in the Federation Account.

“So, there is no subsidy payment in the way the old subsidy scheme used to work where they were paying the oil marketers, but there is an under recovery, a loss on the importation of the PMS being borne by the NNPC and therefore indirectly being borne by everyone one of us.”

“Having said that, with the oil price consistently higher now, we should begin to start seeing some accruals into our Excess Crude Account going forward, because we are starting to see some recovery in quantity.

“But remember that the quantity estimate is 2.5 million barrels per day and it must be consistent every day and the price above the benchmark before you get automatic credit into the Excess Crude Account.

“Having said that, what we do expect is that this year, we will begin to accumulate funds into the Excess Crude Account.”

On why there is a budget deficit despite increase in revenue remittances by government agencies, Adeosun stated, “On funding of the budget, the Customs will report that they made a trillion naira, the FIRS and so on; that is absolutely correct.

“But if you also follow those who cover the Federation Accounts Allocation Committee meetings, you will know that that money is shared every month among the three tiers of government. That is what makes up FAAC.

“FAAC is made up of Customs revenue, the FIRS revenue and the NNPC revenue. So, that money is not just for the federal budget, it is all for the three tiers of government; that’s all they all live on.

“So the Customs has improved its revenue significantly and will continue to do so, but you need to remember that there are three tiers of government sharing that money.”

The minister added, “It is also the function of the size of the budget. This administration is running a significantly larger budget than the budget of previous administrations; that was deliberate because as my colleagues had said, we were in a recession.

“And when you are in a recession, the way you get out of it is to spend money. So, we increased the size of our budget deliberately; we will need to borrow the difference and that is why you have the deficit, which is what really translates to the massive spending on infrastructure that helped us out of recession in five quarters when many oil producing countries stayed in recession for two, three years.

“That was a deliberate strategy of this government because we needed to spend our way out of recession. We spent specifically on infrastructure, which we felt will create jobs and drive growth.

“And it is quite interesting listening to my two colleagues say how the linkages between the money we released, the programmes and projects they are doing and the grassroots are all being implemented and there is a trickledown effect of what has been done.”