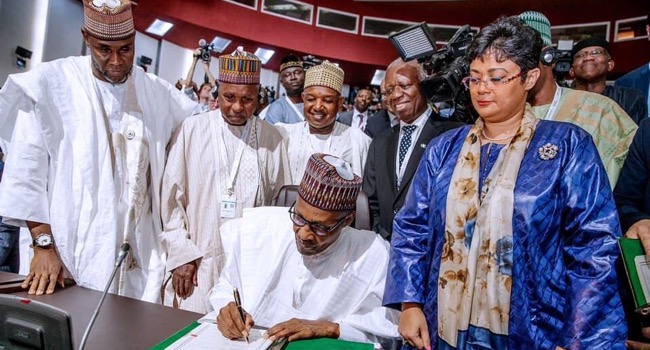 The Nigeria Employers’ Consultative Association, NECA, has warned that Nigeria may soon become a dumping ground with the signing of the controversial African Continental Free Trade Agreement, AfCFTA by President Muhammadu Buhari.

The Director General of NECA, Mr. Timothy Olawale stated while speaking to State House correspondents after the leadership of NECA met with President Buhari on Wednesday in Abuja, declaring that Nigeria took great risks by signing the agreement.

It would be recalled that President Buhari signed the agreement recently after a long delay, during which government consulted with several groups in the country, including NECA.

The group however warned that one major negative implication was that AfCFTA would turn Nigeria into a dumping ground for all manner of goods.

According to the group, the Nigerian economy, lacking in key infrastructure, was too fragile to withstand competition from other countries.

It also said it was against the plan by the Federal Government to raise Value Added Tax, noting that the economy was already weighed down by multiple taxation and could not absorb more taxes.

On the implications of joining the AfCFTA, Olawale said: “The African Continental Free Trade Area agreement is laudable. There are lots of benefits inherent in it. We also know that it is capable of engendering capital in flow into the country.

“However, before we start talking about benefits derivable from it, we must also talk of the likely damage it can do to an economy that is fragile like ours, which behoves on us as stakeholders and government to put all hands on deck to address those issues.

“Those issues border on those variables that will ensure the competitiveness of Nigerian businesses and industry. We don’t want a situation where our business are not competitive due to the disadvantaged environment they operate. Of course, we are all familiar with the disadvantaged environment with regards to issue of infrastructure, among which is power and the issue of road network – that is, transportation for goods and services and accessibility to the different business environments.

“What we are saying is that if all these issues are not addressed properly, to make our business competitive, definitely we are going to be at the receiving end, to the extent that our nation will become a dumping ground. Some of the factories that are even struggling presently may end up folding up.

“Of course, we know the history of the textile sector and that can be repeated in any other sector and we don’t want us to get to that extent. That is why we are saying government should put mechanisms in place to address these issues, so that we can be competitive and take our rightful place by maximising the benefits of the AfCFTA.

Also Soeaki on taxation, the NECA DG insisted that the association would not support any increase in taxes, adding that NECA told Buhari its stance at the meeting.

He added: “Basically, what we told the President is what we have repeated over and over again in the public domain; that there is no basis for increase in taxation. As it is, organised business concerns are already being overburdened with all sorts of taxes and levies.

“As a matter of fact, we have calculated 105 different taxes and levies we are paying as we speak, which are cumbersome and burdensome. So, we had advised that rather than resort to any form of increase in taxation, what government should be looking at is putting mechanisms in place to widen the tax net in such a way that almost 65 per cent of non-compliant tax payers are captured in the tax net. That way, more revenue will accrue into the coffers of the government.

“We specifically also voiced our concern with the suggestion and proposal out there that Value Added Tax should be increased. We have advised government that if it comes to be, it will reduce the purchasing power of Nigerian workers as well as the poor masses that the President is working hard to improve their lot.”