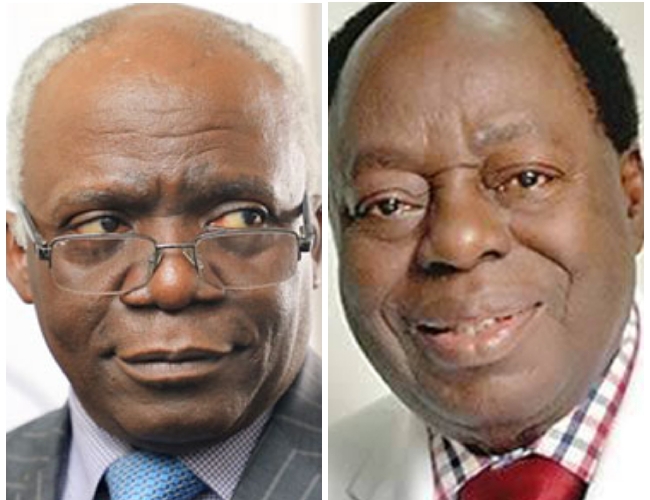 In a statement which was also jointly signed by Dele Adesina (SAN), Olu Daramola (SAN), Dayo Akinlaja (SAN) and Gboyega Oyewole (SAN), the lawyers tagged Aribisogan’s impeachment as a display of rascality.

Aribisogan was removed from his position and suspended indefinitely on Monday after spending only six days in office.

Hours after he was sworn in, the police laid siege to the assembly complex over claims that some persons were planning to attack the lawmakers.

The statement from the legal luminaries reads: “The situation in the Ekiti state house of assembly should be of extremely grave concern to every decent and discerning mind,” the statement reads.

“Under and by virtue of section 92 of the constitution of the Federal Republic of Nigeria, 1999 (as amended), once elected by the members of the house, as done in the case of Aribisogan, the speaker shall continue to be in office during the lifespan of the particular house except, inter alia, removed from office by a resolution of the house of assembly by the votes of not less than two-third majority of the house.

“It is plain as day that the elected speaker was not allowed to function in office for the spate of one day before the sealing off of the complex. Pray, therefore, at what point in time could he have committed any infraction of the constitution, any other law or the rules of the house to warrant his supposed removal?

READ ALSO:Ekiti Assembly gets first female Speaker, as Aribisogan is impeached after one month in office

“Assuming without conceding that the speaker had committed any infraction, was he not entitled to be confronted with the allegation in that respect and given reasonable opportunity to defend himself? If so, when was he accorded that?”

“By their actions, they have demonstrated a penchant for political rascality, impunity, brazenness and recklessness of no mean measure.

“Let it be mentioned and registered, posthaste, without any modicum of equivocation, that the purported impeachment of Hon. Gboyega Aribisogan as well as the announced suspension of seven members of the house is an exercise in utmost futility and, unquestionably, null and void.

“If care is not taken, and if all of us seal our lips, fold our arms and get relaxed on our seats and allow this rascality and impunity to go unchecked, in no distant future, the governor of the state would be impeached and forced out of office in like manner.”

Speaking further, the SANs asked the new speaker to resign from her position and quit partaking in an “unlawful enterprise”.

“Pointedly and succinctly asserted, Hon. Olubunmi Adelugba cannot continue in office as speaker of the Ekiti state house of assembly, and we plead with her to honourably stop parading, presenting or holding herself out as the speaker of the state, as her so-doing constitutes not just an illegality and unconstitutionality, but also a perseverance in such an unlawful enterprise.”

They described the governor’s silence on the matter as a “threat to peace, order, good governance and harmony in the state to put it mildly and respectfully”, and asked him to rightfully exercise his power as Ekiti’s “chief executive officer”.

They also asked the lawmakers to “appreciate the inviolate nature of the sovereignty of the legislative house, and stop hobnobbing with outsiders or powers-that-be to usurp the powers and jurisdiction, rights and privileges, constitutionally and democratically conferred on them”.