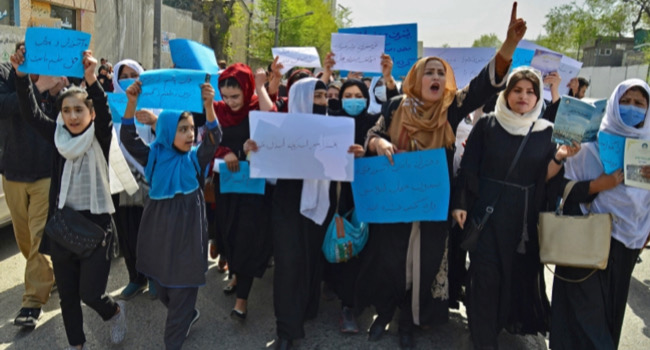 More than 50 Afghanistan girls and women on Saturday, defied the Taliban regime and staged protests in front of the Ministry of Education in Kabul, against the regime’s decision to shut down girls’ schools in the troubled Asian country.

The decision of the regime to close the schools which is yet to be explained by the Taliban, however, means that girls above the sixth grade will not be able to attend schools.

The protests came days after the Taliban administration decided to shut secondary schools for girls until further notice, a few hours after it had announced the reopening of schools shut since they took over power in August 2021.

Last Wednesday, thousands of jubilant girls across Afghanistan had flocked to various schools to resume after the Education ministry announced the the resumption of classes for girls of all ages.

But just hours into the first day of resumption, the Ministry reversed itself by announcing a shock policy reversal that left jubilant girls and their parents feeling betrayed while foreign governments and opponents of the regime expressing outrage.

Carrying placards with inscriptions like “Open the schools! Justice, justice!” the protesters chanted repeatedly, with some carrying school books as they gathered at a city square in Kabul.

They also held banners that said “Education is our fundamental right, not a political plan”, as they marched for a short distance, but were later dispersed as Taliban fighters arrived at the scene.

After coming back to power, the Taliban had promised sweeping changes from their earlier six years in power from 1996-2001 which were marked by human rights violations and a ban on women’s education and jobs.

“We are going to allow women to work and study. We have got frameworks, of course. Women are going to be very active in the society but within the framework of Islam,” Zabihullah Mujahid, the Taliban’s spokesman, had said at a news conference on August 16, 2021.

But since then the opening of high school for girls has been stalled and press freedom has deteriorated, forcing hundreds of female journalists to flee the country for safety.