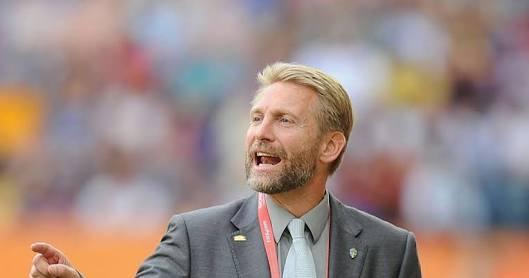 Super Falcons head coach, Thomas Dennerby is of the opinion that one of the drawbacks in African women football is the players play individually rather than collectively.

The Swede gaffer, who led the Falcons to the African Women’s Cup of Nations (AWCON) last year, said the individual skills are there to match teams from other continents but there is no team work.

“There are a lot of skilful and creative players in Africa, but these players need to understand how to play together as a team,” Dennerby told bbc.co.uk.

“Football is really a team sport, one player cannot do it all. They [African countries] can perform better when they go to the World Cup as a team.

“African teams need to learn to move the ball around, defend and attack together as a unit.

“I think sometimes they play more individually and in a bad shape as a collective side unlike teams from other continents. It’s the biggest difference affecting them.”

Dennerby guided Sweden to third place at the 2011 Women’s World Cup and is now preparing to take the Super Falcons to this year’s finals in France.

Dennerby, who guided Sweden to third place at the 2011 World Cup, took over the leadership of the Super Falcons in January 2018 and is currently preparing the team for the 2019 World Cup.

Falcons thrashed Burkina Faso in their opening game of the ongoing Women’s WAFU Cup of Nations in Ivory Coast.

“No, I’m not under pressure as a coach because we are working well,” he said after the game.

“We’ve prepared well with the tournaments in China and Cyprus, so the Nigeria federation has been very supportive.

“There is nothing to complain about and I know we have a team capable of doing well at the World Cup.”

For the World Cup billed to hold this summer, Nigeria are in a tough Group A alongside hosts France, 1995 winners Norway and South Korea.

Thiem beats Federer in Madrid quarters, to face Djokovic next