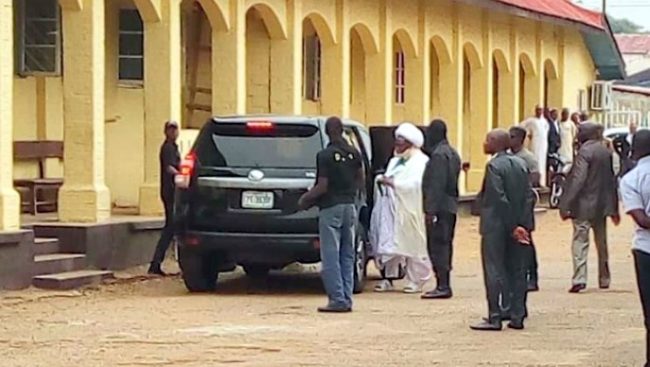 Pro-Iranian cleric, Ibrahim El-Zakzaky who has been in custody since 2015 after clashes between troops and his followers was Tuesday finally arraigned to face criminal charges.

El-Zakzaky and his wife were brought from Abuja to the Kaduna State High Court to face charges including culpable homicide and unlawful assembly.

An oral application was moved for the bail of the cleric and his wife. However, the presiding judge, Gideon Kurada, asked him to put his application officially in writing.

The case was adjourned to June 21 by the presiding judge based on an application by the prosecutor for them to properly file their statement of claim.

Following the trial, Shiite Muslim Islamic Movement of Nigeria members protested in Kaduna demanding the release of their leader.

Read also: My govt has recovered trillions of Naira stolen by people without conscience – Buhari

The development marked the second time the Shiite leader has been seen in public after being taken into custody.

Despite court orders that he should be freed, El-Zakzaky has been detained since December 2015 when the bloody clashes broke out in Zaria.

His supporters have held a series of protests in  Abuja in recent weeks to demand his release and have had a series of clashes with police.

Rights groups have accused Nigeria’s military of killing more than 300 IMN supporters and burying them in mass graves during the 2015 confrontation, a charge the military continues to deny.