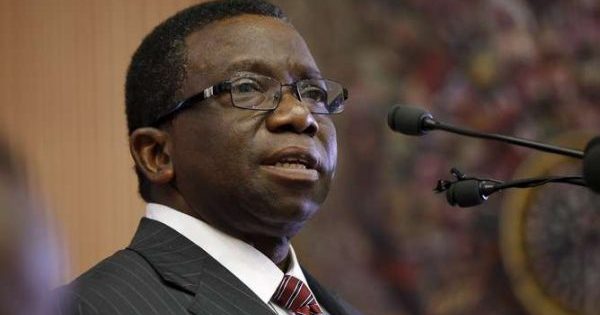 The Federal Ministry of Health has directed the National Agency for Food and Drug Administration and Control (NAFDAC) to stop issuance of permits for the importation of codeine as an active pharmaceutical ingredient for cough preparations.

The directive which takes immediate effect was issued by the Minister of Health, Professor Isaac Adewole in his office in Abuja on Tuesday, adding that the directive became necessary due to the gross abuse Codeine usage has been subjected to in the country.

It is believed that the government’s action must have been influenced by a documentary titled, ‘Sweet, Sweet Codeine,’ which was aired about 48 hours ago on the BBC.

In its stead, the Minister said Codeine containing cough syrups should be replaced with dextromethorphan which is less addictive.

According to a statement by Olajide Oshundun, an Assistant Director Of Information, in the Federal Ministry of Health, the minister also directed the Pharmaceutical Council of Nigeria, (PCN) and NAFDAC to supervise the recall for labelling and audit trailing of all codeine containing cough syrups in the country, while he has also banned sales of Codeine containing cough syrup without prescription across the country.

He noted that NAFDAC had an emergency meeting with the Pharmaceutical Manufacturers Group (PMGMAN) to inform them that there is an embargo on all new applications for registration of codeine- containing cough syrups as well as applications for renewal has been abolished.

The statement read in part, that the “PCN has been directed to continue enforcement activities on Pharmacies, Patent and Proprietary Medicine Vendor’s Shops and outlets throughout the country.

“The National Agency for Food and Drug Administration and Control [NAFDAC] was also directed to fully carry out its functions among others: to regulate and control the manufacturing, distribution and sale of drugs, including inspection at points of entry of drugs, drug products and food for compliance with the new directive”.

The minster further said that “as a way of discouraging youths to shun the drugs, the Federal Government through Federal Ministry of Health shall partner with National Orientation Agency (NOA), Nigeria Football Federation (NFF), Football celebrities, members of the Actors Guild of Nigeria, Performing Musicians of Nigeria and other celebrities to drive national campaign against drug abuse”.

He however lamented, that easy access to codeine, tramadol and other substances of abuse is promoted by the chaotic drug distribution system.