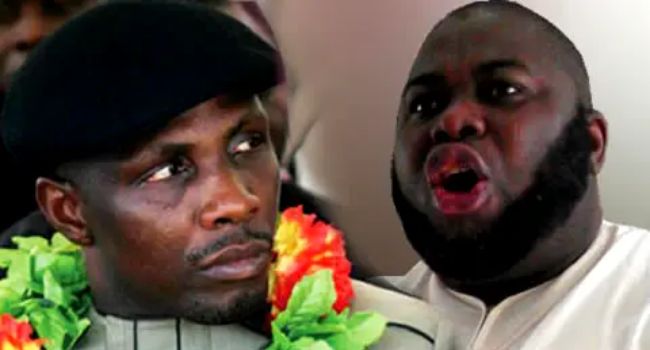 Former militant leader and founder of the Niger-Delta People Volunteer Force (NDPVF), Alhaji Mujahid Asari-Dokubo, has once again, attacked the founder of the Movement for the Emancipation of Niger-Delta (MEND), Government Ekpemukpolo, also known as Tompolo, over a multibillion naira pipeline surveillance contract awarded to him (Tompolo), by the Federal Government.

Dokubo had, in a social media video on Saturday, lampooned Tompolo over the contract, wondering why the FG should award such a contract to the Delta State-based Tompolo. He also warned that Tompolo should stay away from Rivers and Bayelsa states.

Resuming the war of words in another video on Monday morning, the NDPVF founder warned Tompolo not to get anywhere near any pipeline in the Kalabari area of Rivers, where he comes from and is also a king.

In the video, Dokubo is heard saying the Minister of State for Petroleum Resources, Timipre Sylva, facilitated the contract for Tompolo to spite him because of past disagreements between the two.

He also bragged in the video that he “would serve it hot to anybody who entered his Kalabari homeland in connection with an oil pipeline.”

“You take the whole of Bayelsa own and then you come to Kalabari. If Timipre Sylva gave you because he wants to clip my wings, when he was a House of Assembly member, did I clip his wing?

“I am older than he is. When he was governor, did I clip his wings? That I am becoming too powerful, so he connived and gave pipeline contract so that he will destroy what we are doing to make the government he is part of, stable.

“Therefore, he brought Tompolo and Tompolo gathered people and told them he would buy guns and give them. Let them come. I am not boasting. I think soldiers will guard him here. Let them come. I did not talk about Rivers state. I said Kalabari. They cannot take it. Let them take any place they like, not Kalabari.

“People say Tompolo saved me. Where did Tompolo save me? I am the one that saved Tompolo. People are alive, they know. Does Tompolo leave Oporoza? Does he not know me? Saved me where, how?

“I took my things there. I went to fight them with my men. When I want my things back, they did not agree to give me. Tompolo brought 48 rifles for me which I take go. Did they give me one human being? I take my boat go, I take my guns to go, I take my General Purpose Machine Gun, GPMG go, take my rocket launchers go in 1998/1999, 2003.

“Igbo blood flows in my vein, so that is it. I come from five generations of educated people; I went to the school when some of you were in the bush. If anybody has betrayed Ijaw nation, they are the ones. Niger Delta Development Commission, NDDC, is dead today.

“These are the people and betrayers, evil men that have kept Ijaw land like this, believing that they must have everything at the expense of other people. You are saying Tompolo saved me, how? Since we have been fighting, did you hear Army has entered my camp before since I fought?

“They destroyed his Camp-5 in three days. Until today, the army is in Camp-5, which is a military base.Since we have been fighting, did you hear the army sent troops to my camp?”