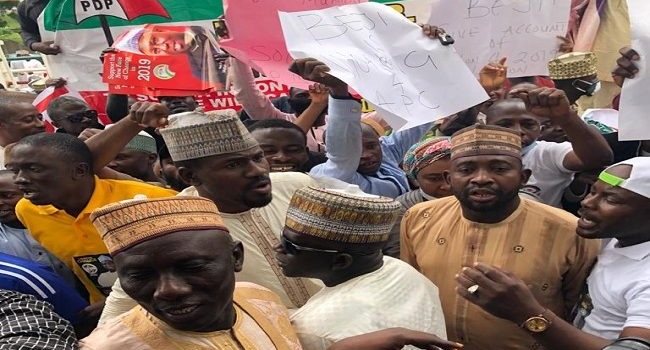 The Legacy House, Maitama Abuja used by the Peoples Democratic Party (PDP) National Working Committee (NWC) as an alternative secretariat, was again on Wednesday besieged by protesters from Niger State.

The aggrieved protesters accused the national financial secretary of the party, Abdulahi Maibasira, who hails from Niger State, of involvement in anti-party activities and demanded for his removal.

According to the protesters, who came from Suleja Local Government Area of Niger State, Maibasira had allegedly been romancing with the All Progressive Congress (APC) in Niger against the interest of the PDP.

They also warned the PDP leadership not to impose the former Niger State chairman of the party, Tanko Beji, for another tenure against their preferred choice of Mukhtar Ahmed.

Earlier on Tuesday, a group of protesters, also from Niger State, had stormed the party’s secretariat over alleged manipulation of the party’s local government congresses result in the state.