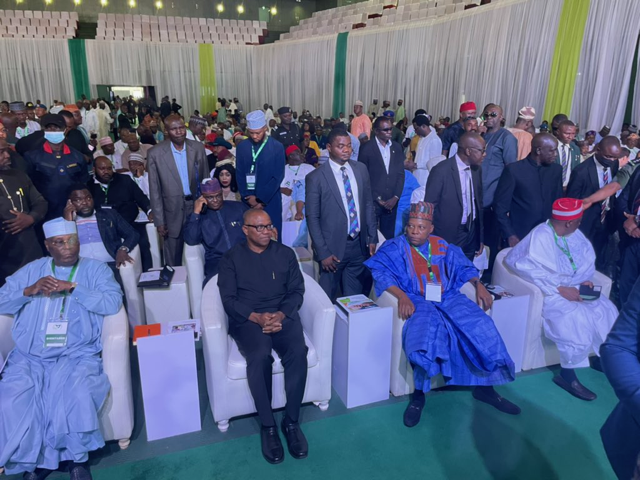 The 2023 presidential flag bearer of the ruling All Progressives Congress (APC) Asiwaju Bola Ahmed Tinubu, was conspicuously absent as presidential candidates of other political parties met for the signing of a peace pact.

The event was organized by the National Peace Committee (NPC) headed by the former military Head of State, Abdulsalami Abubakar, in Abuja on Thursday.

Present at the now-customary peace pact signing which is done at the beginning of every election circle, was Tinubu’s running mate, Kashim Shettima, alongside the candidates of the Peoples Democratic Party (PDP), Atiku Abubakar, Peter Obi of the Labour Party and Rabiu Kwankwaso of the New Nigeria Peoples Party, amongst others.

The peace pact, according to the organisers, was basically an agreement to be signed to ensure a violent-free campaign, election, and the need for candidates to accept the outcome of the results after declaration by the Independent National Electoral Commission (INEC).

The Thursday signing was the first treaty while the second treaty would be signed in January, 2023, shortly before the elections.

This is not the first time Tinubu will be absent at events where the presence of presidential candidates were required.

In August, he also missed out on the Nigerian Bar Association (NBA) Conference in Lagos, while Shettima stood in for him.

On Tuesday, there were speculations that it was Tinubu’s absence that forced the APC to postpone the kick off of its presidential campaign activities with the excuse by the Campaign Council Director General, Simon Lalong that the party wanted to harmonise various support groups.

In an interview on Wednesday night on a Channels Television programme, former Governor of Edo State and ex-National Chairman of the All Progressives Congress (APC), Adams Oshiomhole, confessed that he did not know if Tinubu, was in Nigeria or outside the country.

In the interview, Oshiomhole who is the Deputy Director-General of Tinubu’s campaign team, said he could not tell the whereabouts of the APC flag bearer.