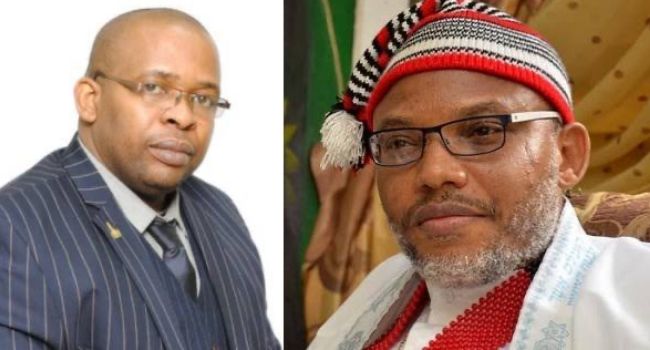 Estranged former Deputy Leader of Indigenous People of Biafra (IPOB) Uche Mefor, has, once again, accused the detained leader of the proscribed Igbo separatist group, Nnamdi Kanu, of orchestrating and instigating the violence, destructions and killings in the South-East through his comments.

Mefor who has continued to blame Kanu and IPOB for the escalating violence in the region, said in a post on Facebook on Wednesday that the “deliberate killing and spilling the innocent blood of Igbo people by Kanu’s IPOB insurgents have effectively dimmed the light on the prospect of achieving a Biafra Republic soon.”

He said, “the insecurity in Igboland was orchestrated by Kanu’s violent utterances, threats of such violence, and its official adoption as a policy,” Mefor wrote.

“Simon Ekpa is a member of IPOB and was among the Facebook bloggers drafted by Kanu in the last quarter of 2020 to help do the hatchet job of blackmailing innocent people and promoting violence against those they called saboteurs and traitors for him.

“They are one and the same group of people. They are essentially part of the wider alliance of evil non-state actor violators of human rights in Igboland—targeted assassinations, torture, enforced disappearances, and other forms of inhumane and degrading treatments against unarmed Igbo Biafran civilians.

“These are killers of their own people, all in the hope of getting Biafra. They kill their brothers in the name of Biafra, the same people that they claim to protect and liberate.

“Finally, take this or leave it, we maintain that IPOB will destroy themselves by themselves. Their latest self-destructive, self-annihilating move is hypocritically denying their atrocities in broad light and shifting their culpability to one of their own called Simon Ekpe.

“The more Simon Ekpa is demonised by IPOB, the more IPOB exposes and implicates themselves; and ultimately compound the case of their leader because they are the same evil syndicate and conglomerate.

“IPOB have made the reality of Biafra restoration even more remote by their criminality and are helped and enabled by helping the Nigerian state to criminalise the project.

“Consequently, rather than being near or immediate, the Biafra restoration will continue to be a mirage until the dent and damage are repaired and undone,” Mefor added.

This is not the first time Mefor has accused Kanu of being behind the violence in the South-East.

In another Facebook post on March 14, Mefor had accused Kanu of “turning the gun against the very people he claims to protect” and killing them in the process.

“The Indigenous People of Biafra under Nnamdi Kanu (IPONK), crossed the line when they turned their weapons against and joined the Nigerian state to begin to victimise the already victimised people of Biafra and especially the Igbo part of Biafraland (Alaigbo),” Mefor had written then.

Wike cautions PDP’s NWC against siding with any presidential candidate