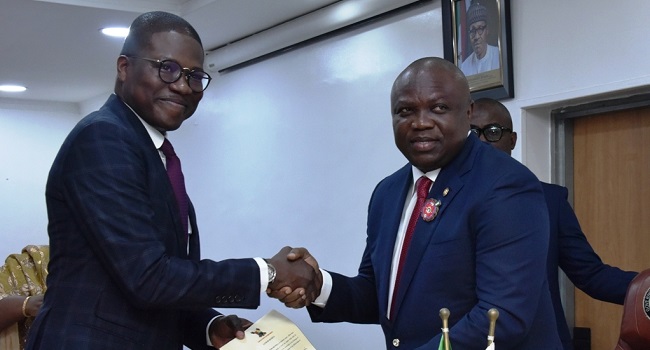 The governorship candidate of the Peoples Democratic Party (PDP) in Lagos State, Jimi Agbaje, has criticised the appointment of Hakeem Muri-Okunola as the new Head of Service in the state, saying it was “insensitive, unjust and disruptive”.

Governor Akinwunmi Ambode had, on Monday, sworn in Muri-Okunola as the 21st HoS in the state, in place of Mrs. Folashade Adesoye who retired in December 2018.

At 46 years old, Muri-Okunola is said to be the youngest ever HoS in the history of Lagos State.

Agbaje, in a statement by his campaign organisation’s Directorate of Media and Publicity, on Thursday, described the appointment as “insensitive, unjust and disruptive of the civil service hierarchy.”

He said, “Indications are that, to pave way for the assisted meteoric rise of the new HoS, the Lagos State Government had, between January and November 2018, forcefully retired no fewer than 21 permanent secretaries considered as superiors and more experienced to the new man.

“These are seasoned personnel capable of fitting perfectly and effectively in that office. But in this era of impunity, they have been offloaded prematurely.”

The PDP candidate dismissed the new HoS as “part of the oligarchy controlling and monopolising all the levers of power in the state,” citing his position as the Personal Assistant to former Governor Bola Tinubu, which, according to Agbaje, imbued Muri-Okunola with “very abnormal privileges.”

“Muri-Okunola lacks broad-based exposure. Whoever becomes HoS is usually a civil servant with widespread exposure, as he must be abreast of all issues related to the bureaucracy and governance.

“But all these rules and traditions have been bent for this appointment,” Agbaje added.

He stated that the development portends “grave danger” to the state’s bureaucracy, established on the foundations of merit-nurtured progression through the career ladder.

He said, “It is befuddling to imagine how officers, who are 15 years older than the new HoS, will take orders and directives from him.

“From all indications, this might be too far-fetched and difficult and it has a way of impacting negatively on governance, taking into cognizance that the civil service is the engine room of not just government but of the society also.”