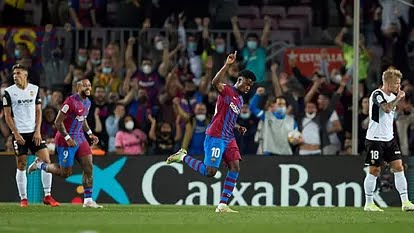 Sergio Aguero made his first La Liga appearance for Barcelona since moving to the Spanish club in their 3-1 win over Valencia at the Camp Nou on Sunday.

Aguero, who switched to the Catalan giants from Manchester City at the start of the season, had been off the pitch due to an injury he was nursing.

The Argentine staged a return to the Spanish topflight since scoring a hat-trick against Mallorca for Atletico Madrid as a 22-year-old back in May 2011.

Although Aguero did not score, Ansu Fati, who was making a first League start in nearly a year, marked his comeback with a goal.

Fati scored the equaliser in the 13th minute, seven minutes after Gaya had put Valencia ahead. Memphis Depay scored from the spot on 41 minutes before Phillippe Coutinho sealed victory late on.

The result moves Barcelona up to seventh in La Liga. They are two points off second-placed Real Madrid, five off Real Socidad, having played a game less.

Barca play Dynamo Kiev on Wednesday after 3-0 defeats in both their opening Champions League group games.

The Ronald Koeman side will then go on to face rivals Real Madrid in El Classico next Sunday.

Osimhen tags winner against Torino ‘most important goal’ of his career